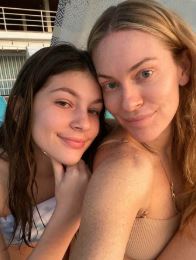 In 2020, Leah McSweeney joined the cast of “Real Housewives Of New York” as Bethenny Frankel’s replacement. With the development, the public began to take a keen interest in people around her. Kier Marie, her daughter, was one of the aforementioned people.

Read till the end and discover more about Kier aka Kiki. The wiki below also highlights her age, bio, siblings and dad!

Reportedly, Kier Mari was born around 2008. As such, she turned 12 years old in 2020. Meanwhile, her birthday and full date of birth escaped public records.

Per her mom’s The Observer interview, Kier was conceived during the 2006 NYFW. At the event, her parents had presented their newest venture “Married to the Mob.”

Kier’s mother and father never got married. More importantly, they didn’t have another child. As a result, she didn’t grow up with a sibling. Despite the split, her parents stay in mutual terms to raise Kier in a good environment.

About Her Father Rob Cristofaro

Kier Mari’s father Rob Cristofaro is a notable name in the fashion industry. Beyond helping Leah McSweeney launch “Married to the Mob,” he also co-founded the streetwear brand “Alfie” in 1999.

A native of New York, Rob started as a graffiti artist. Admittedly, his outlook on life changed once he and Leah became parents to Kier. The two would even brought a property in 2008.

Kier Mari’s mother Leah McSweeney came into prominence after winning a $75 thousand settlement against NYPD in 2002. With the money, she went on to launch “Married to the Mob” and earn the socialite status.

Leah never felt right to speak about her 2002 arrest with her daughter until she had to. In a 2020 interview, the reality star shared that Kier discovered her mugshot — while working on a school project — on Google Image Search. Admittedly, Kier didn’t make anything of the debacle.