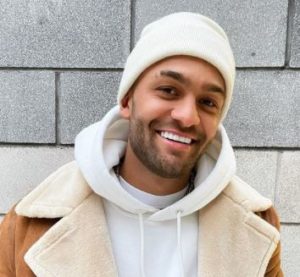 After a huge success with Casa Amor twist on season 6 of Love Island, ITV2 brought back the surprise on its following season in 2021. It introduced 12 new faces mid-way through the show — Dale Mehmet was one of them.

Delve into the world of this newcomer over this Dale Mehmet Wiki.

As per Dale, he is a super chilled person and felt like he’d get on well with everybody in the villa. “If I meet someone then that would be amazing. But I take everything as it comes,” he remarked.

Also, Dale said that if “somebody needs something,” he would always be there to give them a hand.

After Dale’s selection on Love Island, his close friends Jay Munro (the model), and Craig MacIntyre (the boxer) both took it their respective IG to wish him the best of luck.

Corresponding to his birthday, Dale is of the Scorpio zodiac.

Born to parents of mixed ethnicity, Dale Mehmet shared that his family was “really tight.” His father is half Turkish and half Scottish. “I’ve got a wee bit of Turkish in me,” he claimed.

Other than that, not much information was available about his parents and siblings.

Also, we’ve come to know, Dale has a cousin named Gail McGlinchey. As of 2021, he worked at Lloyds Banking Group and was engaged to Andy Jenkins.

Mentioning his distinct features, Dale has brown eyes, a chiseled jawline, and an intimidating body covered with tattoos.

Talking about his tattoos, Dale is admittedly a “massive geek” who loved “sci-fi moves, gaming, and animes”. So, his tattoos are all a mix of them.

He has “GANG GANG” inscribed over his fingers (except thumbs), a giant panda over his arm, a geisha (with a dragon tattoo) over his other arm, a medusa over his chest, Vegeta (from Dragonball) on his one hand, and a split demon face over his other.

As of July 2021, Dale entertained 12.1K followers over Instagram @dalehuncho. Most of his pictures then flaunted his shirtless pics, amazing dresses, and lots of sneakers.

A barber by profession, Dale started his career by shadowing quite well-known barbers in his hometown Glasgow, Scotland for about two years. Then, he started his own studio and soon reached the height of his mentors.

According to him, during the start, he needed a lot of people to practice on — “who didn’t mind you giving them a bad haircut.”

Although he might have worked under other barbers, Dale claimed that he taught himself how to cut and style hair.

In 2021, Dale was working from his unisex saloon “Huncho Barbers” located in his hometown. Reportedly, a gens haircut for 30 mins costs around $24.

Aside from his time as a barber, Dale is also a professional model. He has modeled for different clothing brands as Adenosine, Faux Amour, and Recharge Apparel.

Just in case you are curious, a barber in Glasgow earned around $40 thousand per annum.

Dale Mehmet entered Love Island 2021 as a single lad, looking for love but not so desperately. He said, “I’d like to meet someone I like and can move forward with, but I’ll just take it as it comes.” And it seems he’s already found that one person he can “move forward with”. She’s the letting manager, Faye Winter.

According to Dale, he liked Faye’s attitude and personality. “I feel like we would get on,” he added.

However, Faye was the most sought-after girl in Love Island who was initially paired with Brad. And Dale wasn’t the kind of guy who would back away from something he wanted. He said,  “I’m not a bad guy who is going to steal somebody’s girl. But if I want something then I’m going to pursue it.”

Dale remained adamant about taking Faye as his girlfriend.