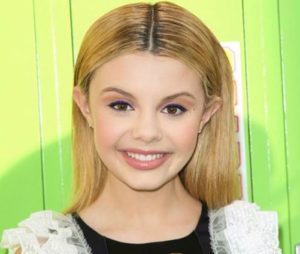 The star of the hit song Lunch Money, Mallory James Mahoney aka Ainsley Riches was featured on teen drama TV series On My Block season 3.

Fans were already excited about Mallory’s appearance in On My Block amongst other rising actors like Sierra Capri, Jason Genao, Brett Gray, Diego Tinoco, and Jessica Marie Garcia.

Popular amidst the Disney fans, Mallory gets recognized as Katy Cooper from the DCOM, Adventures in Babysitting.

The child prodigy was also cast as Destiny Baker in the comedy TV series Bunk’d.

Learn all about the little secrets that Mallory James holds as the article unfolds.

Mallory James Mahoney couldn’t even remember how young she was when she was first introduced into the show business.

Being trained with the theater group at the age of 5, Mallory always gained the best of what she embarked upon. By the age of 9, she had already landed her first major role.

She was also instructed by Cathryn Sullivan, Cathryn is famous for training stars like Demi Lovato and Selena Gomez to take off their career.

She grew up in Fort Worth, Texas with her lovely friends who she liked to call her siblings.

Mallory James Mahoney was 15 years old when she was cast in the TV series On My Block in 2020.

Admittedly, Mallory didn’t want the show business to affect her studies. During her high school days, she was always an excellent student and her parents were in favor of her decision too.

Where Is She Now? Role On “On My Block”

With natural blond hair and humorous personality, Mallory James Mahoney was fit to take on the role of Ainsley Riches in the TV show On My Block.

Her role in the show depicted as a savage princess. She gave Jamal some valuable advice against his taunt on her for cultural appropriation.

Mallory first appeared in the ep.1 of the show as Jessica was listening to Lunch Money.

There were also rumors about Mallory’s character Ainsley having similarities with Queen JoJo aka JoJo Siwa from Dance Moms.

Mallory James Mahoney stepped into the industry from her first commercial for Chuck E. Cheese.

In June 2018, Mallory made her first TV show appearance as Destiny Baker in Bunk’d on an episode titled We Can’t Bear It! She was also cast as Eleanor in the TV series Tough Cookie.

With infinite opportunities flooding her way, fans hoped Mallory would soon rise to a greater prominence that she deserved.

Reportedly, Mallory James Mahoney’s net worth was estimated to be around $1 million before 2020.

Talented and beautiful, Paulina Chávez initially discovered fame after starring as Isabella in the short TV...