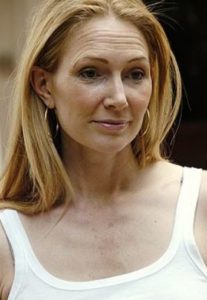 Worldwide fame for an average individual could be dreams. Some turn it into reality through smart moves and hard work whereas, others gain recognition just being in the vicinity of someone popular.

Jean Muggli Strahan is the prime example of the latter. Her romantic relationship with pro-athlete Michael Strahan garnered her undivided attention. But after the separation of the married couple, her whereabouts have become a matter of concern.

So this wiki-style article serves as a see-through into what is she doing and where she is now? So delve into it.

Jean Muggli Strahan was born on 20 November 1965. She was born and raised in the United States of America. Growing up, she had a fun childhood under the love and care of her parents.

And the memories were further accentuated by her sister, Denise Muggil, being with her. Besides that, Jean’s family details have escaped the public radar.

Growing up, Jean had a hard time maintaining her body weight. Her struggle with anorexia as a child made it harder for her to keep her body healthy.

Jean’s educational pursuit is also a secret buried deep in herself. But, after graduating high school, she started working for several stores as a salesclerk, particularly cosmetics.

Michael Strahan is the former professional football player and a co-host of ABC’s Good Morning America. 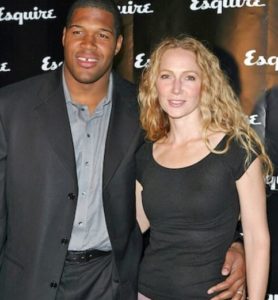 Frequenting the shop for several weeks, Michael finally did it.

Talking to beta.nydailynews.com in March of 2005, Jean recalled,

I figured either he was the cleanest man on the planet or he wanted to ask me out. I was not into athletes. But I learned very fast that he is not your typical macho kind of athlete.

On 18 July 1999, the love birds shared the vows in a beautiful ceremony. The married-couple had twin daughters, Sophia and Isabella, within 4 years of being together in 2004.

Before Jean, Michael was married to his first wife Wanda Hutchins. They also had two children, Tanita Strahan, a degree holder of Designing and Merchandising in LA whereas Michael Anthony Strahan is an undergraduate in Psychology.

In March of 2004, the relationship between Jean Muggli Strahan and Michael Strahan hit the troubled waters. Allegedly, Jean had called 911 to report her husband threats to abuse her.

Jean made several allegations regarding the bad blood she had with Michael.

She had reported abuse, physical assault that includes punching her on the face. Jean also added that she vomited blood because she believed her kidney was damaged after his physical abuse.

More on that, she had accused Michael of spying on her sister while undressing through a camera installed in her bedroom.

Whereas, Michael had his side to the story. He claimed on confronting his wife for the unaccounted withdrawal of $3.5 million for no particular reason and explanation on her part. He also was the one to file for the divorce.

After an arduous trial and investigation, judges ruled out Michael being the assaulter.

But, the case was settled with the divorce that followed immediately with a $15 million as alimony for the settlement. Furthermore, an additional amount of $18000 was to be provided every month for child care support.

The settlement and alimony figure was the highest and labeled as the most expensive divorce settlement, ever.

With the alimony Jean won as part of the divorce settlement and her job as a store manager, she accumulated a net worth of $15 million.

Following her divorce, Jean Muggli Strahan was known to be relocated from Texas to North Dakota. Her post-divorce life was rarely made public. Her lack of official social media sites has made it difficult to track down her current location.

Jean might’ve carried on the parallel occupation after she relocated but her priority would certainly be a job of a mother. She was working hard to raise her children with proper love and support.

Even after the divorce, the couple maintained a sound relationship with each other. Jean often mentioned her ex-husband as her best friend, just not in a relationship. She had let him keep in touch with his children. 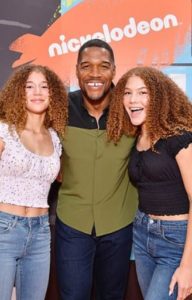 In 2018, Jean let her twins share the spotlight with their father in 2018’s Kids-Choice Sports Awards.

Post-Divorce: Dating and Relationships and Updates

Jean Muggli Strahan has successfully kept her dating life private after her divorce with former football player. But her ex-husband might’ve gotten over the second marriage.

Michael was already on to the next relationship with a young anonymous lady. Later in, it was confirmed the girl was Kayla Quick.

The pair were spotted together in St. Barts enjoying their vacation together. They rarely make joint-public appearances but 2018 was an exception. The couple left Dave Chappelle’s party in Los Angeles in February 2018.

Kayla Quick has a history of run-in with the law but that doesn’t seem to bother Michael at all.

On 11 March 2020, Michael made a headline. He accused her ex-wife Jean of mentally and emotionally abusing his twin daughters. In addition to that, she sought full custody of the two.