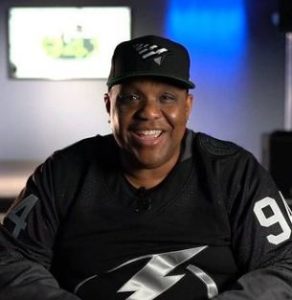 Orlando Davis is firstly known as the radio personality of WiLD 94.1, secondly, he garnered attention as the former husband of Jennifer “Jenn” Potthast of TLC’s supporting cast 90 Day Fiance. Learn more about his career, net worth, details on his wife now, and family through this Orlando Davis Bio.

Orlando Davis AKA Arlandal Davis Jr. was born to his father Arlandal “Lam” Davis and his mother Mary Jo Davis in his hometown of Gary, Indiana, the United States.

Moreover, Arlandal served in the United States Armed Forces and was a retired Gary Fire Department. He also owned and operated Lam’s Kerr McGee service station. But, almost no details on her mother surfaced at the time of this writing.

In his family, Orlando has a brother named Antunone Davis Sr. and his two sisters: Antoinette Allen and Vanoissa Dugan.

Orlando Davis is a big man often compared to Brooklyn legend rapper Biggie. He also dressed as Cee Loo Green on Halloween and the resemblance was uncanny. Along with size, Orlando Davis stands tall at a height of 5 feet 9 inches (1.75 meters).

In June of 2020, news of Orlando along with three of his host diagnosing Corona made headlines in Tampa Bay Times. He insisted that all of the equipment were carefully sanitized but once the state opened, it was hard for them to maintain social distancing which led to him falling victim to the pandemic.

Starting with details on Instagram, Orlando Davis is on Instagram with 45.9k followers. He posted 4610 times in total as of June 2021. Furthermore, He is on Twitter with 18.9k followers in total. On the platform, he posted almost 15.9k times.

Moreover, Orlando is on Facebook where the platform garnered him 9,892 followers.

Orlando Davis attended Andrean High School in 1985. But, his parents finally let him attend a public school which was William A. Wirt Senior High School. He graduated as a class of 1990. Following graduation, he enrolled at Florida Agricultural & Management University where he studied business economy and Finance.

Orlando started his career in the CBS Radio/WiLD Tampa as Program Director/Mornings/Janitor. His career in CBS Radio began in July of 1998 until December of 2014. He became manager of Drama Dept at Wild 94.1.

Furthermore, he took over the responsibility of Program Director at Beasley Broadcast Group starting from 2015. In August of 2015, the news of him extending his contract with 94.1 WLLD-FM was officially announced on social media.

He had signed a five-year extension to his contractual agreement with Beasley Media Group Inc.

Also, he joined the news coverage of the 2010 Haiti devastation, reporting to 46 affiliates, from Seattle to New York.

WiLD 94.1 also does an Annual Toy Drive for the Children’s Home Network. Orlando worked on top of the three-story-tall toy tower for weeks. He dedicated a week on top to help raise money, toys, bikes, for the CHN, that housed abused, neglected, and abandoned children.

The rumor caused him to avoid Erik’s DJ job and radio job.

As the social media of Orlando’s wife suggests, Orlando Davis married Jenn. The couple was in a relationship together until they decided to get divorced after their marriage failed. 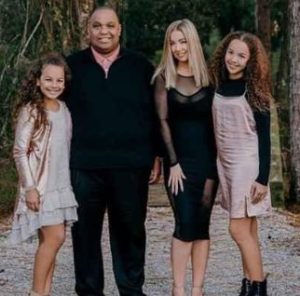 Jennifer and his ex-wife Orlando Potthast together with their beautiful daughters (Pic: Instagram)

But even after the divorce, the couple stayed close to one another as support. They have found a common ground for co-parenting and Orlando showed nothing but support to his ex-wife.

However, Orlando & Jenn had two beautiful daughters: Kaelyn Xia Davis and Brielle Sarai Davis; 13 and 11 respectively as of the June of 2021. While Kaelyn entered her years as a teenager, Brielle is in her pre-teens.

Kaelyn, his oldest daughter, is a phenomenal ballet dancer. She also competed in several competitions and also stunned judges and the spectators present on the show with her moves.

Their two daughters have definitely inherited Jenn’s genes as they are growing up to be two beautiful girls.

Since no details on his new dating situation have been updated we would like to conclude that Orlando Davis hasn’t married the second time. Let along “Wife Now”, he doesn’t seem to be publicly in a relationship with anyone as of June 2021.