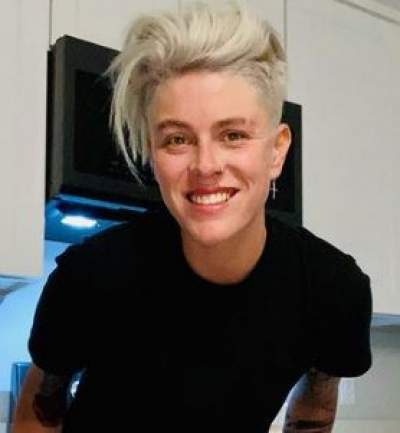 Just in the news: Orange Is the New Black star, Taryn Manning is engaged to her fiancée, Anne Cline.

So, who is Anne Cline?

Find out, below in this Anne Cline wiki.

Anne Cline grew up celebrating her birthday on April 4th and therefore reached the age of 30 in 2021. This makes her 14-years younger than the Sons of Anarchy actress who turned 42 on Nov. 6, 2020.

Anne Cline hails from her hometown of South Georgia.

Her mom is Christine Lytle Cline and her dad is Jc Cline. The folks were living in Charleston, South Carolina, at the time of this writing. Also, Anne’s dad is originally from Bluefield, West Virginia and he studied at Montreat, North Carolina.

Further, Anne has a step-brother named Remi Pimm. Originally from Atlanta, Georgia, Remi is a Saint Augustine, Florida inhabitant and the University of St. Augustine for Health Sciences alum.

Anne Cline stands to below 5′ 8″ height which noticeably towers over her partner’s 5′ 2″.

Also, Anne with beautiful green eyes is a tattoo lover. She has marked these beautiful designs on her neck, arms, and a lettered “HOPELESS ROMANTIC” on her hands.

Anne Cline, a singer-songwriter and full-time musician, had almost an estimated $400K net worth (before 2021).

Over the past couple of years, she has had the opportunity to open for some big-name artists including Shawn Mullins, Miranda Lambert, Philip Philips, Cole Swindell, Puddle of Mudd, and many others.

She is part of a dynamic 2-piece band Cline Street and has been considered a triple threat by her fans as on stage as can sing, play guitar, and the keys. Plus, she is accompanied by her “amazing/one-of-kind drummer” Jarrett Street.

If you wish to catch her perform live, her June 2021 schedule is out which you may discover on her social accounts.

Then, there is also Anne Cline’s merch store where she sells stuff that is uniquely designed for her fans.

Meanwhile, her fiancée Taryn, who landed her first major role in 2001 as “Maddy” in Crazy/Beautiful, already had $3 million net worth back in 2013.

Besides acting, she is also a fashion designer, singer-songwriter, vocalist for the electronic duo Boomkat, and the co-owner of the clothing brand “Born Uniqorn”.

Last we checked, Anne Cline was in the process of relocating to Panama City in Florida. Never did we anticipate that she would be engaged to our favorite Tiffany “Pennsatucky” Doggett from OITNB.

So, on June 11, 2021, Anne asked Taryn to be her wife at a restaurant in Panama City. Anne, in fact, had turned a performance she was putting on into a full-blown proposal.

A video from the event was obtained by TMZ which showed Anne standing on stage in front of a microphone before she jumps down and gets on one knee in front of Taryn. The Falls Church, Virginia native was clearly taken by surprise. Overwhelmed and placing her hands over her face, she is seen kissing Anne on the lips. The crowd around them was just as much in excitement. Even the DJ/MC told everyone, on the mic, to give it up for them, which the audience was happy to comply with.

A representative for the Hustle & Flow actress told TMZ that “the two are thrilled” about their exciting news. In a statement to the outlet, Taryn also added, “It was the easiest YES I ever said!”.

The couple, however, was yet to share their happiness with their fans on social media. Also yet, no one could tell just how long they have been together. Also, their wedding plans are a complete mystery to us. Mostly because they are not one of those couples who documents their every big small move on social media.

Not to miss, back in 2017, in an interview with the People Magazine, The Murder of Nicole Brown Simpson actress had said—at the time, while she had experimented with other women in the past, she identified then as straight. Despite her history of dating women, she denied being gay. Her words were: