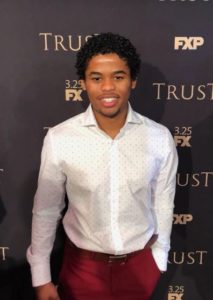 On 21st April 2020, Netflix premiered the All Day and A Night from the co-writer of Black Panther Joe Robert Cole. Among many remarkable casts from the show, Isaiah John who gained prominence from Snowfall was the one everyone got their eyes on.

Per the latest updates from the show, Isaiah was portraying the role of TQ, a hot-headed gang member. Those who knew him from Snowfall were familiar with his life. However, for those who just got acquainted with him, this article provides you access to his info.

Scroll down the wiki-article based on the life of Isaiah John.

Isaiah John was born on 16 November 1995. He turned 24 years old while celebrating his birthday in November 2019.

As per Isaiah’s date of birth, his zodiac sign is Scorpio.

Isaiah John was born to his anonymous biological father and his mother Pamela John in Atlanta, Georgia. The actor hasn’t shared any further details on his parents.

Pamela raised him along with his other siblings: Racquel, his sister, and Ivan, his brother.

All the known members of his family were somehow related to the entertainment industry. Pamela, born and raised New Yorker, was a rapper. His sister Racquel was also an actress whereas his brother Ivan was a stuntman.

Along with his burgeoning popularity, his social media reach grew in a considerable number over the years.

Additionally, Isaish was also active on Facebook. He had a total of 2876 followers on the platform.

Isaiah’s love for acting could be traced back to his young age. He and his sister used to perform for the family when he was only 13 at the time.

However, in 2009, he kick-started acting as a career path when he worked in No Way Out, a short film by a film student. The experience planted a desire in him to establish as a successful actor.

Following that, he enrolled in an acting class for formal training. Also, he learned techniques to express himself even better.

In 2013, Isaiah landed the role of Camp Evergreen Kid in Standing Up. In 2014, he made TV show debut appearing for a minor role in Finding Carter.

However, the biggest break of his career landed on his lap in 2017 when he was the cast on Snowfall. In the crime drama series, he portrayed the role of Leon Simmons, Franklin Saints’ best friend.

Following that, he was credited for starring in All Day and a Night (2020).

Before Isaiah proved his worth as an actor in Snowfall, he worked in some odd jobs to support his acting career. He had worked as a janitor at a gym. Due to the flexible working hour, the job supported him both financially and career-wise.

Like most up and coming actors, Isaiah John could be seen focused on acting. His social media platform provided a glimpse into his life. However, he preferred keeping the interaction strictly professional.

Because of this reason, the private info of Isaiah was hard to unearth. Following the success of Snowfall, his recognition grew exponentially. But, nobody spotted him with any of his girlfriend-prospects.

Though Isaiah’s nearest and dearest individuals surely witnessed his romantic escapades. However, the details never saw the light of the day.

Consequently, like most single actors, Isaiah also couldn’t isolate himself from a gay rumor. But he like most actors, he never bothered on addressing the assumptions.

Until Isaiah gives the good news about him finding the one, he is still single as of the time of penning this article.

All Day and a Night Barbershop: The Next Cut Joe Robert Cole Snowfall

Ashton Sanders is an American actor who piqued the interest of many as he was cast in the movie All Day and a...