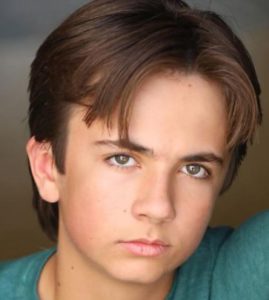 The second season of DC Universe‘s much-beloved Stargirl returned. The first episode of the new season premiered on 10 August. And with the show, the much-beloved superhero actors and actresses Brec Bassinger, Yvette Monreal, Anjelika Washington, Cameron Gellman, Trae Romano, and many more also returned to the TV screens.

This Trae Romano Wiki is a part of series on Stargirl cast members and will cover everything you need to know about Trae including the information about his mom and dad, his net worth, as well as his height and age.

Trae’s dad’s name is Joseph Romano and he is a businessman. His (Trae’s dad’s) Facebook says that he currently lives in Atlanta, Georgia. And that is it.

Trae’s grandfather, i.e. his dad’s dad was also alive and has appeared a few times on his IG but we do not know his name. There were also a couple of uncles, named Uncle Tony and uncle Beans, who sometimes appeared on his Instagram.

Trae’s mom and dad appear quite often on his social media but not much detail was known about them. Trae was not shy about flaunting his loving mom and dad but he was a little wary of giving up too many details about them. Here is a little we know about his dad.

Trae’s mom’s name is Katy Hogshire Romano, also a businesswoman. She is the founder of ARM CANDY, a bracelet company that benefits Patrick Dempsey Cancer Centre. Trae’s mom is herself a cancer survivor. She was diagnosed with cancer in 2013 but she survived the disease and is still alive.

She was previously the owner of a couple of companies, Industry Tavern and Zucca. Furthermore, Trae’s mom went to Butler University for her college and then later graduated with a degree in buying and merchandising at the Fashion Institute of Technology.

According to Katy’s Facebook profile, Trae’s parents have been married since 20 June 1993.

Trae’s maternal grandfather, Dick Hogshire, is also a businessperson. He is the owner and a restaurant chain across the United States called Charlie & Barney’s.

Apart from mom and dad and granddad and a pair of uncles, Trae Romano had two sisters Elle Romano and Sophia Romano. Elle is a chef at True Food Kitchen and lived in Buckhead, Georgia as of 2021. We do not know much about Sophia except she lives in LA, California.

Fans certainly seem to think so but there has been no evidence to support the rumor. Neither Ray Romano, Trae nor anyone related to either of them has ever come forward to confirm the rumors.

Ray Romano is a stand-up comedian and actor who is famous for his sitcom Everyone Loves Raymond and as a voice of Manny in the Ice Age movie franchise.

As a 16-year-old who had one major TV series appearance, Trae Romano had a commendable following on Instagram, not so much on Facebook and Twitter. On his blue-tick Insta handle @traeromano, he had over 24k followers.

Trae was an actor who was famous for playing Mike Dugan in DC Universe‘s superhero TV series Stargirl. Trae’s character in the show, Mike Dugan, is the step-brother to Courtney Whitmore (or the titular Stargirl), played by Brec Bassinger. Trae was one of the important secondary characters in the show and had appeared on 15 out of 18 episodes of the show.

Does Trae Romano Have A Girlfriend?

As far as we know, Trae Romano did not have any girlfriends. In fact, the only girl (let alone girlfriends) who appeared on his social media were his sisters or his mom. So, either Trae was quite secretive about any possible girlfriend(s) or he did not have one.