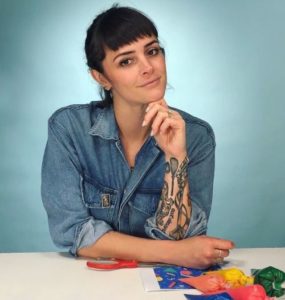 Ashely Holt has been in the baking business for over 10 years and has appeared on dozens of competitions and shows. The model-turned-baker has an impressive resume working in TLC, Discovery, and several other networks. Now that, she is starring in Netflix’s new show Baker Squad, let’s get an update about her life.

For that, delve into this Ashley Holt Wiki.

Ashley Holt set on another milestone of her career starring in a Netflix’s cooking competition show named Baker Squad. She appeared on the show alongside three other casts; Maya-Camille Broussard, Christophe Rull, and Gonzo Jimenez.

They were all chosen by Milk Bar creator Christina Tosi. During the series trailer, Ashely told, “The whole thing with the Bake Squad – we can have some friendly competition – but we’re still a team.“

According to Famous Birthdays, Ashley Holt was born on 11 August. She turned 34 years old in August of 2021. Per that information, she secured Leo as her zodiac sign.

Ashely Lauren Holt was born to her lesser-known parents in her hometown of Loganville, Georgia, United States. She spent most of her early life in Georgia before she moved to New York City. When it comes to the details on her folks, she shared a few snaps of her parents on her social media.

She chose to remain tight-lipped about the name of her folks. However, Ashely left a little information on her social media here and there.

Based on an Instagram post, her parents were divorced. Consequently, her mother remarried in March of 2015. In fact, she was the one who was in charge of the wedding cake which she carried all the way from New York to South Carolina where her mother lived.

By profession, Ashley’s mother worked as a respiratory therapist, based on a tweet from February of 2013. She also claimed her mother to be a phenomenal baker, but only on birthdays. Ashely also revealed that her step-father is a pharmacist whereas her former step-dad has a business of ventilators.

As for Ashely’s father, no details regarding him surfaced on her socials and public domain.

Talking about her siblings, Ashely grew up with two younger sisters. She occasionally tags one her of her sister, Abbey Wolf (who goes by the name @wolf_mother) on her IG. Abbey is an entrepreneur, shopper, designer, and stylist. She also worked in the costume department of Sweet Magnolias.

Her other sister Amber Price is a nurse and midwife.

It is safe to say baking isn’t the only thing Ashley Holt loves. The model-turned-baker standing at a height of 5 feet 8 inches (1.72 meters) inked multiple tattoos on her body which held different meanings for her. She has tattoos of lobsters, flowers, butterflies, and several other figures on her body.

Her tattoos were the reasons why she quitted pursuing modeling in the first place, especially the ones on her back.

Ashley Holt, after graduating high school from Loganville High School in Georgia, moved to Manhattan to pursue a modeling career. According to her, modeling was an absurd career choice for her since she was an awkward punk girl with gauged ears and hair with every color of the rainbow.

She ended up landing modeling gigs (2006-2008) with brands such as Marc Jacobs and Valentino. Ashley also made appearances in high fashion magazines like Vogue, Allure, and Glamour. This eventually led her to Japan.

A romance blossomed which in a way paved the way towards her culinary career. Ashley returned to Georgia and moved to the Louisville area. The provided an opportunity for her to attend Sullivan College for culinary classes. But, financial trouble got her to not re-enroll in the school.

Instead of baking, Ashley was more focused on her career as a culinary producer, creative director, and food stylist, and food writer.

Ashely’s Sugar Monster is her brainchild that manifested as a dream in 2010, while in the shower. As she unfolded that, her business represented her as a person and encapsulated everything she was.

As already touched on, Ashely Holt stayed in the Louisville area because of her relationship with a man. The man was her husband, Bryan Whiteman who at the time was touring as a guitar tech with the band Avenged Sevenfold.

According to registry.theknot.com, Ashley and Bryan registered their wedding date as 25 March 2012. Based on some of the snaps on Pinterest, the two tied the knots on 26 May 2013 in Clark County, Indiana USA. However, Ashley’s marriage with her ex-husband apparently didn’t last very long.

As of August 2021, Ashely Holt was in a relationship with Greg Solometo. It remained unclear if they were just in a relationship or even got engaged and married. Nevertheless, they share a daughter named Chloe. 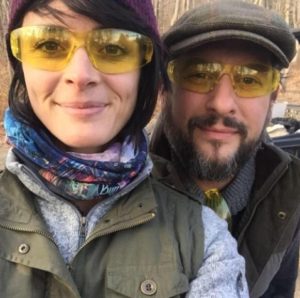 The announcement of a new baby was done on her social media page in December of 2017. Ashely was expecting her baby in early June, but Chloe was born on 14 May 2018. She turned 3 years old in May of 2021.

As for Ashely’s baby daddy, Greg graduated from Emory University with BA degree in European History. He worked in companies such as PaineWebber, Inc, Structured Credit Finance, Lehman Brothers, and Deutsche Bank.

Greg co-founded and is serving as the CFO of Alliance Homecare since August of 2009.

Before You Go: Laura Strayer Wiki: Seal, Age, Family, Height, Who Is She?