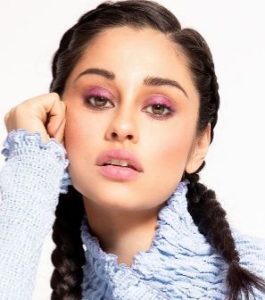 Yvette’s star power had grown in status as she joined the cast of DC Universe-produced TV series “Stargirl” in late-2018.

By reading into the wiki-type bio below to learn about Yvette’s dating status, family life, and net worth!

Standing five feet & four inches in height, Yvette shares striking resemblance with pop sensation Ariana Grande. The two similar-looking superstars are not siblings and related to one another.

Raised by a traditional Mexican mother, Yvette hails from a religious family. Admittedly, she wasn’t permitted to engage in dating or leave the house past five o’clock.

Despite the strict upbringing, Yvette continued to share a loving relationship with her biological parents. The rising actress’ father and mother frequent her sets.

Appearing as “Temperance” in the TV series “Haries,” Yvette Monreal made her acting debut in 2013. In subsequent years, she showcased her acting chops on TV shows including “Chutes,” “Faking It,” “Matador” and “The Fosters.”

In 2018, DC Universe announced that Yvette would star as “Yolanda Montez/Wildcat” in its upcoming series “Stargirl.”

Onto big-screen roles: Yvette made her film debut in 2016 with “Lowriders.” “Once Upon a Superhero,” “Monsoon” and “Rambo: Last Blood” are her notable movies.

According to online reports, Yvette shows off a six-figure net worth.

As a teenager, Yvette Monreal couldn’t completely immerse herself in the dating scene. Once she reached her 20s, many expected her to have a series of boyfriends and try new relationship every other six months.

Defying all the pre-conceived notions, Yvette took a rather chill approach to dating. So much so that the beautiful actress opted not to share the identity of her boyfriends to the world.

Back in 2015, Yvette was romantically linked with “Faking It” co-star Gregg Silkin. As neither the “Matador” actress nor her alleged boyfriend Gregg never acknowledged the romance, the dating rumors eventually dissipated.