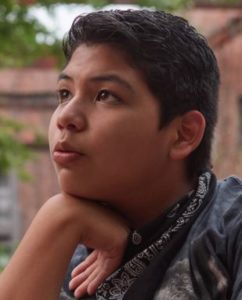 Taika Waititi has been a flag-bearer of indigenous people from all over the world. And now, he has come up with a TV comedy called Reservation Dogs which is focused on the experiences of four Native American youths. Lane Factor plays one of the four main leads of the show.

And in this Lane Factor, we will tell you, dear readers, everything you need to know about the young actor. Where he is from? Who are his parents, what is his nationality? His age, his height, everything.

Reservation Dogs premiered on FX and Hulu on 9 August 2021 with positive reception from both fans and critics. The show is about four native American teens Elora Danan Postoak (played by Devery Jacobs), Bear Smallhill (played by D’Pharaoh Woon-A-Tai), Cheese (played by Lane), and Willie Jack (played by Paulina Alexis).

It is not explicit in the show which native American tribe the show’s lead characters belong to. But seeing that the show is based in rural Oklahoma, the Muscogee Nation reservation in Oklahoma is everyone’s obvious guess.

About Lane’s character in the show, Cheese, FX‘s website says,

“Cheese…is the youngest of the group–like a little brother, they all look out for him. He’s not the leader, but has learned how not to be a follower. He is learning from the others, but left alone he would be able to forge his own path. From methheads, fake grandmas, to lighthorsemen, he has a way of seeing the good in people and in the world.”

Lane was cast for the series in December 2020. And it seems like he was really happy to be a part of the show.

Until 10 Aug 2021, Lane was not on Tiktok, but he was present on Facebook and Instagram. And it seems like he started his Instagram only after he was hired as a part of Reservation Dogs. On his Instagram handle @lanefactor, he had just 5 posts and the first post was from December 2020 and was about announcing his role in Reservation Dogs. In the months since he had earned 1.1k followers.

Lane was born to parents Kelly Howell Factor and Steve Factor. His parents were engaged in September 2002 and got married in February 2003. And they have been together ever since. His mother, Kelly seems very proud of Lane for his role in Reservation Dogs.

Apart from his parents, Lane has one sister and one half-sister from his mother’s previous relationship. His sister’s name is Shelby Factor and his half-sister was Kandace Howell.

Apart from his parents and his siblings, Lane also has a very loving uncle (his mother’s brother) Dex Howell.

Lane’s hometown is Midwest City, Oklahoma. He was born and raised in Midwest City. His nationality is American with native American lineage from Creek-Seminole and Caddo nationalities.

Lane is a boy with average height. Actually, we do not know Lane’s exact height. He used to be 5 ft 4 inches when he was 14 years of age. Now that he was 16, he must be somewhere around 5 ft 7 inches. But you cannot really precisely predict the height of young people at that age.

He has dark hair and brown eyes. That we can say with certainty.

Does He Have A Girlfriend?

Lane does not seem to have any girlfriends right now. He was only just starting his career and it seems like right now career is taking the wheels and any possible girlfriends are in the backseat.

As of now, on the very first step in his career, Lane had a net worth of about $100 thousand.

Before starting his acting career, Lane had studied at the Freihofer Actor Factory in Norman, Oklahoma, and completed his The Young Performer Academy. During his studies, Lane had taken film as well as production classes. He also made animations, short movies, and shot “televised live streams for the local community high school football games”.

Moreover, he had appeared in a few commercials and appeared as an extra in few projects. On his Facebook, Lane had listed his hobbies: fishing, DIY projects, and listening to music.