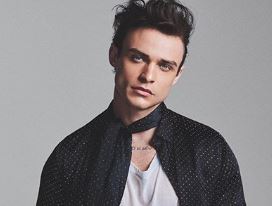 Thomas Doherty rose to fame playing the role of Harry Hook — the son of Captain Hook — in the TV movie “Descendants 2.” Portraying a character in the musical series “The Lodge,” the Disney Channel personality gained more attention.

Jump to Thomas’ Bio plus Wiki and get acquainted with his height, parents, and net worth. By reading along, find out about the actor/singer’s girlfriend, wife prospect, and tackle the gay rumors.

On 24th April 2020, Thomas Doherty became 25 years of age. Per his date of birth, he is a Taurus and celebrates his B-Day on the National Kindergarten Day. The famed actor’s bio stated 1995 as the year he was born.

A native of Edinburgh, Scotland, Thomas Doherty grew up under the care of parents named Anthony and Mary-Lou Doherty. Per the celebrated actor’s Wikipedia page, both mama and papa Doherty were involved in the banking business.

Thomas hailed from a family of five. He was raised alongside two siblings: a sister named Rachel and a brother Niall. Six years his junior, Rachel is an Instagram star and a trained dancer. Meanwhile, Niall played soccer.

Growing up, Thomas played soccer. Owing to an athletic background, he owned a chiseled body with six feet (183 cm) in height and 77 kg.

In 2016, Thomas Doherty landed the role of Sean Matthews in the series “The Lodge.” The subsequent years saw his star in TV shows such as “Catherine The Great,” “Legacies” and “High Fidelity.” A 2020 report stated that he joined the cast of “Gossip Girl.”

From his burgeoning show-biz career, Thomas could afford a luxurious lifestyle. Online reports placed his net worth at around $1.5 million. Undoubtedly, the stated figure is set to see an exponential rise.

Up until 2016, strong rumors were floating around which labeled Thomas Doherty a closeted gay man. December that year, all the speculations about his sexuality subsided when the public became aware of his romance with Dove Cameron.

Thomas met his future girlfriend Dove on the set of the TV movie “Descendants 2.” The former confirmed the dating rumors during an interview with PEOPLE Magazine in February 2017.

Before Thomas, Dove was engaged to her “Liv and Maddie” co-star Ryan McCartan. In October 2016, Dove and Ryan parted ways, following three years of dating and an additional six months of engagement. 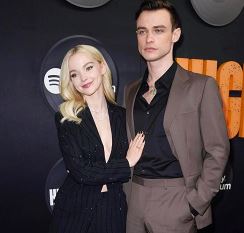 By 2020, Thomas Doherty and Dove Cameron hadn’t upgraded their romance. Forget getting married, the costars-turned-longtime lovers weren’t even engaged.

During her late-2019 interview with ET Online, Dove professed her desire to become Thomas’s wife one day. Furthermore, she asserted that the wedding was still on the cards for them in the future.

About a year and a half earlier, Dove had echoed a similar sentiment when a fan asked her to marry Tom on Instagram. In neither of the instances, she spoke on when and where they would marry.

After 4 years of dating, in October 2020, Thomas Doherty and Dove Cameron called it quits. The actress, however, didn’t announce the split until December that year.

Via Instagram Story, Dove shared— “We know there have been some rumors and confusion lately about the status of our relationship and we wanted to set the record straight.”

She then added— “In October, Thomas and I decided to part ways. The decision was incredibly difficult, but we still have a love for each other and will remain friends. Thank you for allowing us our privacy at this time.”

Actress/Singer Dove Cameron shot to stardom as the star of the Disney Channel sitcom “Liv and Maddie.” She also played the character, Mal, in the “Descendants” film series.

A native of Seattle, Washington, Dove released her debut project — an EP — titled “Bloodshot/Waste” in 2019.