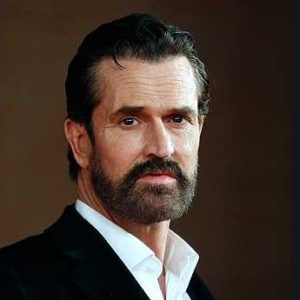 However, the gay actor’s romantic life and relationship with Madonna always generated attention. Scroll down to learn more about the actor.

Rupert Everett was born to his father Anthony Michael Everett and his mother Sara Maclean Everett on 29 May 1959. He turned 61 years old while celebrating his birthday in May of 2020.

More on his parents: Anthony was a British Army who went on to own a business. Whereas, no information surfaced on his mother.

However, in an interview with The Guardian in 2019, he uttered about moving into his 85-year-old mother’s house in Wiltshire West Country. Rupert grew up with his older brother Simon Anthony Cunningham Everett.

Rupert and his family are of English, Scottish, Irish, German, and Dutch descent. He grew up in Norfolk until the age of 16 before he ran away to London.

While speaking to The Guardian Rupert talked about having a gay shame as a young guy. Moreover, he spent a lot of time looking in the mirror trying to look as perfect as it was possible.

Growing in a well-to-do family, young Rupert Everett attended Ampleforth College under the care of Benedictine monks. His gritty ways got him kicked out of the Central School of Speech and Drama as he conflicted with his teachers. 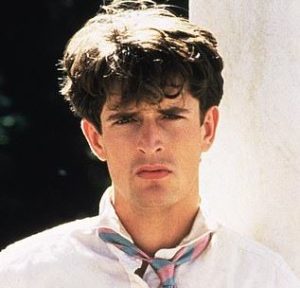 Rupert Everett back when he worked as a young actor (Pic: Dailymail)

He went on to join Glasgow Citizen’s Theatre in Scotland where he self-trained. In the late ’70s, he ran away from the private school.

The British actor spent his young age doing drugs, partying and clubbing, and pulling off a Hollywood style that made women falling for him. But, as he revealed to Arifa Akbar from The Guardian Rupert in his early ’60s, he feels relieved not being young.

But the older version of Rupert Everett lives differently than how he used to.

His Friendship With Madonna

Madonna and Rupert Everett starred alongside in a movie titled The Next Big Thing in 2000. The film revolved around the story of two best friends who fought for a custody battle after having a child together.

Allegedly, the pair who once were BFF’s parted ways because of the box-office flop of the movies only making $18 million.

In a book that Rupert wrote, he described Madonna as a whiny old barmaid. Rumors also surfaced of the two ending their friendship for a reason which they avoided disclosing.

But in an interview with Metro, Rupert claimed the coupled they were still good friends with each other. He even admired her as a person and having nothing but respect for her.

Speaking to Stellar Magazine, Rupert remarked about not seeing Madonna anymore and missing her.

In an interview with Express 2009, The Happy Prince star mentioned Madonna didn’t like the book at all. He carefully dug details on the book not to make others offensive.

However, Madonna felt the infringement of privacy which soured their relationship furthermore. What’s more, Rupert admitted that Madonna doesn’t trust him anymore.

Rupert Everett directed his first play Uncle Vanya and the opening night could be summed up as the disaster followed by another. He ended up hurting one of the actors during the fight scene. But as he returned, he fell off the stage because of the previous accident.

Following that, the opening night was pushed back. He attended stardom in his career and also lived like he was a man with no significance at times.

However, Rupert always fell in love with film and theatre and the nature of the business.

Rupert also found joy in writing in a later year. But, to be more direct, he started writing as works absolutely stopped flowing towards his way around 2008.

He penned two autobiographies where he showcased his talent as a writer. This new love of writing which he found and started allowed him to create characters that he always wanted to play but never could.

The actor is also known for working as the actor, screenwriter, and also marked as a directorial debut for a biopic of Oscar Wilde titled The Happy Prince.

But Rupert puts all of the blame on himself for not making it into the A-list actors. His shyness in front of the camera and not being able to display charisma during the interview lagged him behind.

Overall, Rupert Everett received a total of 80 credits as an actor during his career as of 2020. Meanwhile, his net worth was around $20 million.

Is Rupert Everett In A Relationship? Who Is His Partner?

Rupert Everett came out as gay during the Aids Epidemic was at a peak period in the United States. And it would’ve killed his career at the time. He came to London at the age of 19 in 1975 and the LGBTQ community earned rights only for 8 years.

As of this writing, Rupert Everett has been in a committed relationship of a little over 10 years with his partner Henrique. At a younger age, Rupert craved the danger and excitement like Oscar Wilde did in his life, in his romance.

As for Henrique, he worked as a Brazillian accountant and was spotted during lunch in October 2020. Together for 11 years, Rupert did profess his desire to settle down with his partner, Henrique.