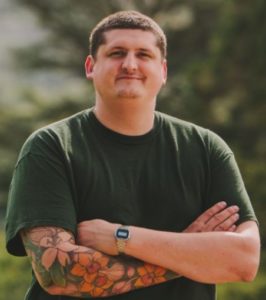 The subject of this article is the chef and owner at Ynyshir Restaurant and Rooms — a destination Michelin star restaurant located on the coast of mid-Wales. His name is Gareth Ward.

Learn about award-winning chef’s age, family, net worth, and partner information by reading this Gareth Ward wiki until the very end.

Gareth Ward was born and raised in his hometown in County Durham, North East of England.

His family members include at least his parents and a sister. His dad’s name is Leslie Ward. We do not know his mom’s name as of this writing.

What we do know, however, is that his mom is Gareth’s biggest inspiration. In Q and A with Four Magazine, Gareth told that his mom taught him about work ethic.

His only sibling is a sister and her name is Katherine Ward. She is a teacher and currently lives in Auckland, New Zealand.

Gareth’s distinctive physical features would be his brown hair and eyes, and a tattoo on his right arm.

As of May 2021, Gareth Ward had not yet spoken on his assets and net worth. However, being the owner of one of the most popular restaurants in the UK, we assume that he has a net worth of at least $1 million.

Growing up in County Durham, Gareth did not care about the food and rarely went to the kitchen too in his childhood.

While talking to the Great British Chefs for an article about him, Gareth revealed that he was a school dropout. Gareth only went to the kitchen when his uncle advised him to earn some money by doing a decent job.

Gareth’s first job was at a place called Seven Stars located in Shincliffe. A guy named Alan O’Kane working with him then handed him the Good Food Guide and asked to pick places he would like to work on.

Though his first choice was Restaurant Gordon Ramsay located in Chelsea, Gareth felt he was not ready for the expertise the place was asking. Later, he ended up working under head chef Aaron Patterson in a place called Hambleton Hall in Rutland.

He worked there for almost five years. While working there, Gareth learned all the classics and became a capable person to cook at a Michelin star standard.

After Hambleton Hall, Gareth joined Seaham Hall because he had already thought that if a restaurant in the North East ever received a Michelin star he would work there–Seaham had won one under Steve Smith. However, when the whole restaurant was bought by Von Essen, everything went pear-shaped.

Gareth, then, called his friend Aaron and was offered a head chef role at Hart’s in Nottingham. He worked there for a year and a half. After which, he joined Sat Bains as a sous chef. Working there for almost three years, Gareth finally felt he was ready for his first head chef role.

Gareth joined Ynyshir–which was called Ynyshir Hall at the time–a country house hotel in rural wales near Snowdonia National Park as a head chef in 2013. Gareth had full creative freedom for Joan Reen, the owner of the restaurant at the time. Unfortunately, when Joan passed, Gareth discussed with the new owner John Talbot to reinvent the place as a restaurant with rooms.

Today, Gareth co-owns the place with his wife Amelia Eiriksson. With his effort and dedication, Gareth has made Ynyshir quite popular in the UK. Good Food Guide ranked Ynyshir as “The Top 5 restaurants in the UK” and made Gareth the “Chef of the Year 2019.”

If you follow Gareth Ward on Instagram, then you know how wonderful a family he and his wife, Amelia Eiriksson have created. Gareth’s partner Amelia is the co-owner at Ynyshir. She is in charge of all things wine and design there.

When she is not working at the restaurant, Gareth’s wife is an architect. Amelia has a Master of Architecture degree from the University of Nottingham. Since January 2017, Amelia has been working as an architect at Studio AEA.

With Amelia, Gareth has a very beautiful son named Karl. Karl was born on August 28, 2019, at exactly 6:12 am. Gareth took to Instagram to announce the newest member of his family.

While Gareth’s IG handle is full of various dishes pictures, Amelia’s Instagram account is filled with their son’s pictures. On October 1, 2020, the small, sweet family went to have food at Restaurant Gordon Ramsay. 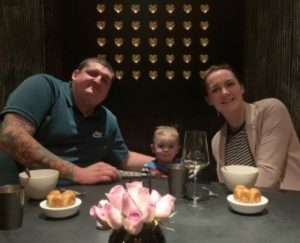 Gareth goes to Restaurant Gordon Ramsay for dinner with his family.

On February 28, 2021, Amelia took some time to share that their son Karl had become 18 months old. Posting a picture of Karl, she wrote, “Today this little firecracker is 18 months old.”