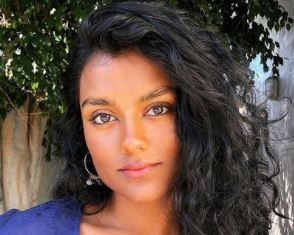 In Feb 2021, The Sex Education star Simone Ashley was all set to join the second season of the Netflix hit series Bridgerton. She would be portraying Kate Sharma — Anthony Bridgerton’s (played by Jonathan Bailey) romance interest.

Season 2 of Bridgerton was said to continue from the reimagined world which showcased the 19th-century British high society and included people of all races. In the previous season, the show brought its stars Regé-Jean Page and Phoebe Dynevor to the limelight. And this season, there is no doubt that Simone Ashley will captivate the heart of many as well.

Keep reading this Simone Ashley wiki to learn more about her.

As per her birthday, Simone is of the Aries zodiac.

Simone Ashley flaunts a South Asian-British heritage. She is a Tamil girl (an ethnic group from South Asia; especially India and Sri Lanka) but was born in London, England.

Talking about her parents, they were a traditional Indian who worried very much about Simone’s future. They preferred for Simone to pursue an academic degree rather than an entertainment life. Because of this, Simone confessed that she felt “stifled” and made her want to “escape and do things” her own way.

However, Simone’s father, despite having a good academic background, was also into arts and music. And this was where Simone’s love for acting originated from. She recalled that her dad would often play rock n roll tunes, or Bob Marley, and the TV always had epic movies on, like Kill Bill.

Now, that Simone is a successful actress, you might think that her parents are happy about her career choice. But that wasn’t the case! Simone shared that her parents still found it “quite scary and unsettling.”

Information about her sibling wasn’t shared.

Did u know: Simone is fluent in Tamil as well.

Reportedly, her body measurements were 33-23-32 inches.

As of Feb 2021, Simone flaunted 256K followers over Instagram. Her posts were filled with stunning solo pictures of her and a few TV-shows promotions.

Being a South Asian actress, Simone faced many challenges in the entertainment industry. She shared that she was judged by the color of her skin and lost roles to girls that are more “relatable” to target audiences and markets. But, she says,

“If I surrender to all of that, where would I be going? No where! F**k that.”

Her advice to all the aspiring South Asian actors was to “Do it!” — Stop worrying about what people thinking of you and just do it.

In light of her education, Simone trained at the Arts Ed school in Chiswick.

About Simone Ashley Role On Bridgerton

Simone Ashley was cast as Kate Sharma on Bridgerton, and for that fans praised the show for including a South Asian lead.

Moreover, the character “Kate Sharma” was originally (as per the book) supposed to have the surname “Sheffield”. But since Simone hailed from South Asia, they changed Kate’s last name to “Sharma”; which belonged to Brahmin, Hindu religion. This was another reason for fans to acknowledge the sincerity of the show.

As of 2021, Simone Ashley didn’t have a husband and appeared single.

Though fans shipped Simone and her on-screen Sex Education boyfriend Armin Karima together, it didn’t seem like they were dating in real life.

Now, with Bridgerton season 2 on the way, the fans have found a new boyfriend for Simone. Jonathan Bailey, who portrays Simone’s romantic interest might be a perfect match for her as well.