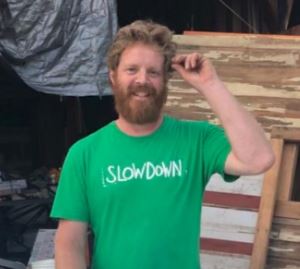 Chase Morrill is the face of the DIY Network’s Maine Cabin Masters. Since the inaugural season to a recent sixth installment of the show, Chase and his crew have been renovating run-down cabins around the state.

If you are new to the show, the show stars Chase, his sister Ashley Eldridge, and her husband Ryan Eldridge along with Jedi (Jared Baker) and Dixie (Matt Dix). The family worked hand-in-hand, saving some of the most historic properties in America.

Read this biography to learn all about the personal life of Chase Morrill.

Corresponding to his birthday, Chase is of the Capricorn zodiac.

Chase Morrill was raised in his hometown Augusta, Maine alongside his sister Ashley Eldridge. Aside from her, Chase has no other siblings.

As for Chase’s parents, they are named Eric and Peggy Morrill. Reportedly, the two were married in August 1970 and together enrolled at the University of Maine at Farmington later.

Unfortunately, Chase’s father lost the battle to cancer and passed away on July 27, 2014, at the age of 68. He was an army who served overseas in Germany and Vietnam. After he retired, he spent many years working in social services while also building and renovating houses. This is where the Morrill siblings inherit their passion from.

Chase’s mother was alive and doing well as of 2021.

His distinct features would certainly be his reddish thick beard and hair. One can argue that Chase looks a lot like Zach Galifianakis from the movie Hangover.

Trivia: Chase usually cuts his hair once a year. But as he got involved with the show, he got a haircut and trimmed his beard every few months

As of Feb 2021, Chase entertained 6K followers over Instagram, and 1.4K followers over Facebook. He didn’t seem relatively active like the other TV stars over social media. However, he did a post about Maine Cabin Masters from time to time.

Also, find him over Youtube at “Kennebec Cabin Company” with 5.3K subscribers.

Reportedly, Chase and his team earned around $30 thousand from one project alone. And they have had plenty of big works like —  the Travis Mills Foundation, Agassiz Village renovation, the Kennebec Valley YMCA playground cabin in Augusta, and many more.

According to Chase, the 2020 COVID-19 pandemic brought them even more business than ever. Guess Chase will be hauling plenty this season.

Talking about Chase’s time on Maine Cabin Masters, it all started when Chase decided to renovate the rustic house his family bought in 2015. He hoisted it onto a better foundation, created space for the water heater, and adding a dormer and pinewood paneling — which got featured in an episode of his DIY Network show.

Chase says, “If we weren’t doing this on TV, we’d still be doing this.”Apart from his career as a builder, Chase is also a podcaster. He talks about all kinds of topics over his podcast called “From the Woodshed”, including his show’s behind-the-scene to useful construction tips.

As of Feb 2021, Chase Morrill was still married to his wife Sarah Morrill. Reportedly, the two are high school sweethearts, who first met at Cony High School.

While Chase spent his days working with the wood, Sarah would be out there helping people. She is a registered nurse and worked at Maine Primary Care Association. Also, she started working as the director of the Maranacook School-Based Health Center in 2021. For her higher education, she attended Phillips Academy and the College of the Atlantic.

Chase and Sarah share two kids — one of them was named Maggie Morrill who had a passion for horse riding.

Trivia: Sarah is a year younger than Chase and celebrates her birthday on September 25.