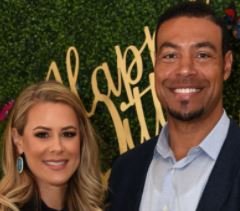 On 15th February 2021, the Hillsborough County Police confirmed Vincent’s death. A housekeeper working at the Homewood Suites in Brandon, Florida found the former NFL star’s body. According to HSCP Department, there were no apparent signs of trauma.

Per the hotel staff, Vincent first checked into the hotel on 11th February 2021. The following day, the police found Vincent safe at the hotel after his family reported him missing.

This Lindsey VanDeweghe wiki explores facts about Vincent Jackson’s wife including her parents, net worth, and Instagram. What’s more, read about her hometown, kids, and job!

In the Summer of 2020, Lindsey VanDeweghe reached the age of 36.

Born in 1984, Lindsey grew up celebrating her birthday on 26th June. Also, she is a Cancer.

As of 2021, Lindsey was reportedly living in Brandon, Florida. Previously, she lived in places like San Diego CA, and El Cajon CA.

According to thesun.com, Colorado is Lindsey’s hometown.

Although there weren’t public records of her parents, Lindsey has relatives named Raymond Vandeweghe and Valarie Vandeweghe.

Talking about her ethnicity, Lindsey’s forefathers were probably from Belgium.

Vincent, on the other hand, had around 43 thousand followers on Twitter before his death. Moreover, some 40 thousand people followed him on Instagram.

For some reason, Vincent used social media to share memes and photos from adventures. On the platforms, he rarely posted his wife, family, and kids.

A philanthropist at heart, Lindsey was instrumental in the success of the Jackson in Action 83 Foundation — a charity Vincent Jackson founded.

Launched in 2012, the Jackson in Action 83 Foundation provides support to military families, focusing on the educational, emotional, and physical health of the children.

Vincent, being a son of military parents, knew what it’s like growing up in a military family.

According to mailchi.mp, in 2018, the foundation distributed $125,000 worth of items to 40 expecting families at our 5th Annual Military Moms Baby Shower.

At the time of his death, Vincent Jackson enjoyed $50 million net worth. Lindsey VanDeweghe and their kids likely inherited the wealth from the late-NFL star.

In 2011, after a substantial dating period, Vincent asked Lindsey the big question.

Vincent popped the big question while being inducted into the UNC Athletic Hall of Fame. At the time, he stepped on the stage and declared to Lindsey— “I love you. I will always love you.”

He then continued— “I want to start a family with you. I want to spend the rest of my days with you. You are my soulmate. Will you marry me?”

On 16th July 2011, Vincent and Lindsey tied the knot. The summer of 2020 marked the couple’s 9th wedding anniversary.

From their marriage, Lindsey and Vincent had three kids: Carter, Amaya, and Dominick. Their youngest child, Dominick was born in October 2016.

Lindsey and Vincent, together with their kids, lived their $3.5 million-mansion situated in the Palma Ceia Golf and Country Club.