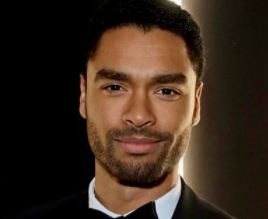 Featured on Netflix’s Bridgerton, Regé-Jean Page is your next TV crush! His alluring portrayal of Simon Basset (the Duke of Hastings) and not to mention his hot scenes with co-star Phoebe Dynevor, had ladies falling all over him.

Regé-Jean shared that he was delighted to be playing a part as one of the highest-ranking nobles in the show. Also, he highlighted the fact that “setting the story in the past doesn’t mean that Black folks do nothing but suffer.” He was more than happy to represent Black people in the 1800s; enjoying life instead of suffering.

Regé-Jean Page was born in the latter part of January in 1990. That made him 30 years of age in 2020. Corresponding to his birthday, Regé-Jean is of the Aquarius zodiac.

To pronounce his name, use “Regé as in reggae, Jean as in Wyclef.”

Born and raised in Harare, Zimbabwe, Regé-Jean Page spent his childhood as the second youngest of four siblings.

Reportedly, Regé-Jean was close to a younger brother with whom he formed a punk band. He played the drums and sang, and also dyed his hair into blue, green, and purple, to trot out the genre. As of 2020, the brothers were still playing music together.

Talking about his parents, Regé-Jean Page’s father was an English preacher while his mother was a nurse. He shared that his dad and mom were of different races, making him of mixed ethnicity.

Furthermore, Regé-Jean’s parents were one of the early couples to get interracially married. And because of that Regé-Jean felt like “a walking political statement.” He added,

“Being a mixed-race child in that environment means that you have to think about crafting your own identity and you question why you belong in that world.”

Regé-Jean admitted to still retaining “an outsider’s view” in his “work and life”. He credited his childhood in Zimbabwe for the “perspective” he carried today.

Regé-Jean Page stands tall at a height of 5 feet 10 inches (177.8 cm) and weighs under 76 kg (167.551 lbs). Mentioning his distinct features, Regé-Jean is a handsome man with brown eyes and black hair color. Also, he has a prominent jawline.

As an actor, Regé-Jean appeared in over 15 movies and TV shows. Listing some of them are:

Also, it was History Channel’s Roots (2016) that gave Regé-Jean recognition in the entertainment industry. His portrayal of “Chicken George” in the show, even caught the attention of Shonda Rhimes’ producing partner, Betsy Beers.

Trivia: Even before Roots, Regé-Jean worked with Shonda Rhimes in the drama For the People.

Circa 2021, Regé-Jean was on his way to stardom with back to back hits: Bridgerton, followed by 1960’s romance movie remake Sylvie’s Love. February that year, he hosted an episode of SNL. The milestone had arrived following a SAG nod.

In light of his education, Regé-Jean attended the National Youth Theatre after moving to London at the age of 14. And finally, after auditioning for two years, he was accepted at the prestigious Drama Centre London.

“The Fall” magazine remarked Regé-Jean Page as “evasive”. It seemed like the actor didn’t like “small talks”. He remained private about his dating life and there was no sign of a girlfriend or wife over his social media either.

In conclusion, Regé-Jean appeared to be single as of 2020.

However, you might have seen the chemistry between Regé-Jean Page and his onscreen girlfriend Phoebe Dynevor. The two looked incredibly hot together and you might be wondering if Regé-Jean and Phoebe were dating in real life. Unfortunately, no, the duo weren’t in a relationship then.

Guess the on-screen womanizer wasn’t so much of a “womanizer” in real life. In fact, Regé-Jean might be the complete opposite of what he portrayed in Bridgerton.

During their joint Access Hollywood interview in Jan 2021, Regé-Jean and Phoebe addressed the dating rumors. At the time, the actor said— “I think everything you need to know is on camera. That’s why we presented it so beautifully for you. All the sparks that flew off of the beautiful scripts that we were handed, and so I think that the sparky scripted material is more than enough.”

A month later, British tabloids outed Emily Brown as the girlfriend of Regé-Jean Page. Photographers snapped the couple outside their $1.1 million London home.

30 years old as of Feb 2021, Emily Brown is a freelance copywriter and a part-time soccer player. Before Regé-Jean, she dated a soccer coach named Jack Badu.

As Regé-Jean Page enjoyed privacy about his dating life, we aren’t sure what his partner-preference was. However, he mostly “enjoyed” playing straight roles, if this answers your question. So, it was unclear if Regé-Jean is gay or not.