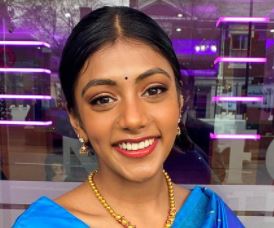 A new face joined Bridgerton for its second season, and her name is Charithra Chandran. The show introduced two new characters of Indian descent — Kate Sharma (played by Simone Ashley) and her younger sister Edwina, portrayed by our star, Charithra.

So, who is this new face, making her big break on Bridgerton. Keep reading this Wikipedia to learn all about her.

As per her birthday, Charithra is of the Capricorn zodiac.

Charithra Chandran comes from a big family. You can go check them over her FB cover picture (as of April 2021). Her parents also often appeared over her socials. 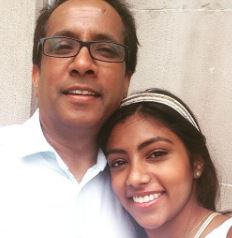 As for her siblings, Charithra has two brothers.

Talking about her ethnicity, Charithra is an Oxford, Oxfordshire-raised, British-Indian. However, she is “desi” as they come. More inclined toward eastern tradition, Charithra followed the Hindu religion, wore traditional attire, and was fluent in Hindi and Tamil.

Trivia: Charithra’s grandmother passed away unexpectedly in August 2020, at the age of 84. In her remembrance, Charithra took it to her IG to share long paragraphs about the hardships her grandmother endured.

By April 2021, Charithra garnered over 6.5K followers on Instagram, and 1.6K followers on Twitter. Most of her posts featured herself and her adventures. Also, it seems that Charithra loved to travel. From “Leaning Tower of Pisa” to “NYC museum” to “Capitol Building”, she posed in front of everything.

Mentioning her distinct features, Charithra is dark hair and eyes color, and she gets a dimple on her right cheek as she smiles.

As an actress, Bridgerton would probably be her big break into the entertainment industry. Before that, she appeared on an episode of the TV show Alex Rider as “Sabina Pleasance”. She had yet to appear in any big movie then.

Though Charithra might be new to the big screens, she has been performing from a young age. She started her career touring West End musicals, and during her time at Oxford University, she participated in many theatre and film productions. Some of her acting credits include:

Flim: Being Kate Brown, The Love Bet, Class S, and The Talents.

Theater: Drunk Enough to Say I Love You,  House of Bernardaalba, and Medea.

Here are some of her talents you might not know: Singer/ Recording Artist, a proficient Bollywood dancer, play “Badminton, Hockey (field), Ice Skating, Netball, Running, Squash, and Tenni”.

Charithra was also a member of the National Youth Theatre. She claimed that performing was “truly” her “life’s passion and goal.”

Apart from acting, Charithra worked as a research analyst at New Policy Institue, and as a private tutor in 2021. Before that, she was a full-time summer intern for Boston Consulting Group, and Global Water Intelligence. Also, she worked as a parliamentary assistant at the House of Commons and as a food server at Bill’s Restaurant in 2015.

For education, she attended Oxford High School GDST from 2013 to 2015. Then, she attended the University of Oxford for her bachelor’s in arts from 2016 to 2019.

About Charithra Chandran Role On Bridgerton

Charithra Chandran appeared as “Edwina Sharma” (Kate’s younger sister) on Bridgerton season 2.  Originally, the siblings’ last name in Quinn’s novel was “Sheffield”, but since they were depicted as Indian descent over the show, the producers decided on the surname “Sharma”.

Over the show, Edwina is taught by Kate to be “the perfect debutante.” A kind-natured and endlessly endearing, Edwina hopes to find a “true love match,” and on her journey, she meets  Anthony who instantly falls for her.

As of April 2021, Charithra Chandran shared nothing about her relationship status. All that’s known was that she was interested in “men”. And from the looks of it, it didn’t seem like Charithra was married either, or ever had a husband. But she was seen getting ready for the “Date Night” over IG in Feb 2020. This could be a hint that Charithra had a boyfriend or was romantically engaged with someone.