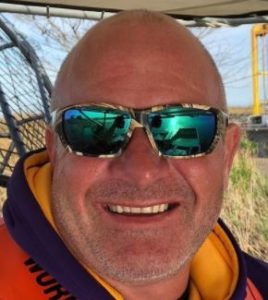 There are a lot of adventure shows on TV but none more gratifying than Swamp People. The sense of joy is different in seeing the likes of Ronnie Adams wrestle with the beasts of swamps, i.e. alligators.

You can consider this article as an homage to the gator hunters of Louisiana. And this article is about one of those gator hunters, Ronnie Adams. Learn different interesting facts about Ronnie, including his net worth, age, and wife.

From what we know, and we don’t know much, Ronnie celebrates his birthday every year on the 15th of February. So, his zodiac sign was Aquarius.

Now what we do not know. We do not know which year Ronnie was born, exactly. Ronnie Adams was born sometime before 1980. That meant his age was somewhere above 40. Nothing precise.

Ronnie Adams was born and raised in Violet, Louisiana. He still lives in his hometown of Violet. Within his family and close friends, he was popular with the nickname junior.

Coming to his family, his mother’s name was Lola Adams, whereas his father’s name was Ralph Adams. Furthermore, he also had two brothers in the family, Josh Adams and Ramey Adams.

We do not know much about Ronnie’s education. He did go to college and played football in college. But we do not know which college he went to and what he studied. Ronnie’s political views were conservative.

Ronnie was not that big on social media, maybe because he was not that active either. On Instagram, he had 64 posts and only 859 followers as of March 2021. We could not even find him on Twitter.

When it comes to physical features, Ronnie Adams has a gigantic stature. He has a height of 6 ft 5 inches and a weight of 265 lbs (about 120 kgs).

His huge body stature is his most distinct feature. Apart from that, he has a bald head, blue eyes behind the thin slits. He also has tattoos all over his left arm.

Finally, Ronnie Adams’ net worth was around $1 million.

Professionally, Ronnie was an alligator hunter. When the beasts of sweet water increase in number in the swamps of Louisiana, Ronnie and company tie up their belts and go hunting. It is a daredevil task, and Ronnie just revels in it.

Ronnie first started alligator hunting when he was just a boy, with his grandfather. As a man, he continued what was his family profession. He even went on to earn money (quite considerable money) and popularity with his profession.

Since 2019, Ronnie has been part of History Channel’s Swamp People, a documentary reality series that follows a group of people hunting alligators in the swamps of Louisiana. Ronnie was among those hunters.

Ronnie usually hunted with his partner Ashley Jones. Ashley Jones was nicknamed “deadeye” on the show because of her on-the-spot aim. Ashley Jones and her husband were also close friends of Ronnie.

Apart from alligator hunting, which was a seasonal profession anyway, Ronnie was also involved in hog hunting. In fact, he was the owner as well as the operator of Elite Airboat Hog Hunting LLC.

The reports were quite varied regarding the salary of Swamp People casts. Some cast members were paid as high as $10k while others were paid a meager of 3k per episode. Considering that Ronnie was part of the show since 2019, his salary could be in the lower half of the range.

When it came to his married life, the information on the web was not as clear as that about his professional life. As of February 2021, Ronnie was engaged with a woman called Jen Smith.

From what we could gather about Jen, she was from Glen Jean, West Virginia. Her mother was Christine Smith. She also had a brother named Randy Smith but he passed away a while ago.

On the one hand, there was a new relationship with not-yet-wife Jen Smith, and on the other, there was the fact that Ronnie already had a grown-up daughter, named Hannah Adams.

Hannah was also born in Violet, Louisiana, but she lived in Picayune, Mississippi. We bet that she was living with her mother, who might be Ronnie’s ex-wife but we know nothing about her. She went to Picayune High School for her high school education. And right now, she was in Louisiana State University.

Right now, Ronnie was, apart from being a daredevil gator hunter, a proud father as well as a dreamy-eyed husband-to-be.