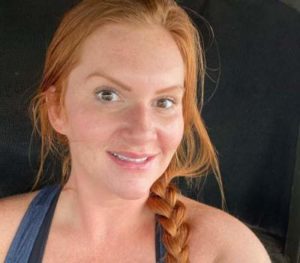 Ashley, one of the few female alligator hunters featured so far on the series, added more credibility to her appearance on the reality television program.

Here’s a wiki-writing about Ashley to help you know her better.

Past her early-30s, Ashley Jones’s zodiac sign is Saggitarius as she celebrates her birthday every year on the 25th of November.

Ashley Jones’s mother’s name is Cindy. However, at the time, one could not shed light on Ashley’s maiden name and the places she lived in growing up.

She seemed super close with his parents. Not long ago, on Father’s Day, she shared a beautiful caption on the Facebook wall, thanking her father for making her as tough as she is, and more. She went on to write how good of a grandfather he is to her kids. And from it, we learned Ashley’s father tagged along with her when she went hunting for her very first alligator.

Her job of working in the sun pulls out her freckles. And as a precaution to developing melanoma like her mother, she wears 110 SPF.

More to her distinct features is her fine, long red hair. She often forms two beautiful braids of them also wearing a cap.

Ashley Jones stands to the height of 5′ 7″ and lately reported a weight of around 54 kg.

After Ashley killed her trophy buck, she went on to hunt an average of eight hunts a week. Soon, was not enough and she began hunting alligators and hogs to fuel the passion that had been missing in her life.

On a certain day, she got to know someone called Ronnie Adams. He offered wild hog hunts and Ashley booked a trip with him for her and her husband. Soon, the three became the best of friends. And it was actually him Ronnie who recommended Swamp People to Ashley.

So, when Louisiana’s alligator season opened in Sept. 2018, both Ashley and Ronnie joined the Swamp People team as the cast members.

The 2021 season will be Ashley’s third time living in the swamps of the Atchafalaya River Basin.

So, this way hunting American alligators for a living, in the past couple of years, Ashley Jones managed an estimated net worth of over $200 thousand.

And while the exact figures on her salary remained anonymous, it was reported the Landry family on Swamp People earned $25K per episode back in 2013.

Ashley Jones is married to Chad Jones, an attorney in Ridgeland, Miss. So, the TV celebrity’s husband specializes in ‘Mass Tort Litigation’, ones related to injuries caused by corporations for their profit.

On his bio, Chad proudly claimed to have handled cases against BP relating to the oil spill, Bayer Pharmaceutical, Johnson and Johnson, Pfizer, and more. He also represents former NFL players who have suffered neurocognitive impairment as a result of repetitive brain trauma.

Outside of his polished career, Chad continued to support Ashley through thick and thin. He especially helped her come out of the three-month deep depression caused by the miscarriage that took place six years ago. This was when Chad had introduced hunting to Ashley. One afternoon, he took her to deer hunting, worried that he could not remember the last time he saw Ashley smile, much less laugh. So, this was the first time Ashley went hunting.

Today, they are blessed with three kids.

Back in Nov. 2020, Ashley took to her Facebook to inform everyone that she, her husband, and the kids were out of quarantine and all recovered from COVID-19. 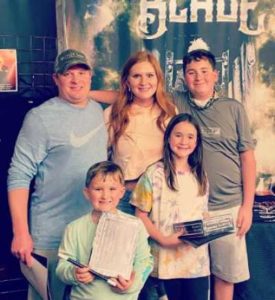 Recovered from COVID, Ashley and the family enjoyed the night at the magic show (PIC: Ashley’s FB)

The Jones kids, despite being the regular features on Ashley’s socials she never really give away their privacy to the outsiders.