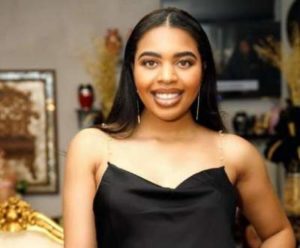 Let us aware you that midway through your first episode of Buried By the Bernards and you will already be falling in love with its fantastic, undeniable cast members; especially the Bernard siblings: Deja and Raegan Bernard.

So, the writing below is about Raegan, the youngest child of Ryan Bernard who pulls double duty by going to school and working as an office assistant at her family-owned business.

Buried By The Bernards introduced to its fans the Bernards family in the order: Ryan, his mother and uncle Debbie and Kevin, and of course his daughters. Raegan and Deja’s mothers (they have different mothers) were not likely in the picture.

The only time, Raegan’s fans her matriarch was during one time when Raegan shared a glimpse from her graduation day on Instagram. 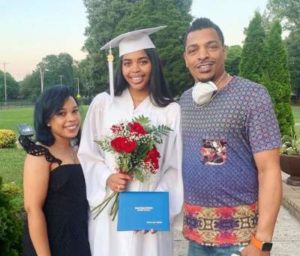 Raegan Bernard with her parents as she graduated from SAA in June 2020 (PIC: Raegan’s IG)

Clearly, her parents were no longer together. But, still one could not tell if they were married in the past.

Raegan also has a brother who goes around as Jayson U. He is a few years her senior.

Age 21, as we write this, Jayson lived in Memphis and New Orleans and attended Xavier University. As it seems, he is not part of the Buried By The Bernards and is also not a Bernard.

Meanwhile, Reagan and her father Ryan came to know about Deja, her other sibling, when Reagan was a fourth-grader and Deja had already turned 15. For Reagan, meeting her estranged half-sibling was like meeting a twin. In her own words:

“We are the same person. Sometimes, we would finish each other’s sentences like real twins”

One could find Raegan Bernards’s personal as well as business accounts (Ralai By Raegan) on Instagram and Facebook. The number of people that followed her seemed to be only getting bigger especially after she and her family were offered the Netflix gig.

Raegan Bernard stood at a growing height of 5′ 7″ and a lately reported weight of around 53 kg. As shown in the reality series, she has a very good sense of fashion. Every time she appears on the screen, she puts on a good amount of makeup, accessories, and the best outfits. Her district features have to be her long black hair, fuller lips, big hazel eyes, and a pretty smile she always carried.

With Buried By The Bernards releasing on Netflix in Feb. 2021, Raegan Bernard also started a new job. The “mini-entrepreneur” as dubbed by Deja, on the show, launched a soy candle brand named Ralai By Raegan.

Besides, she also ran a cake business with her sister which they named Bernard Sisters N the Mix. From what Raegan said, as part of the job, the sisters made pound cakes for everyone in Memphis.

It is obvious such an early age leadership and entrepreneurship in Reagan and Deja is the result of the way their father and grandmother are. Their grandmother taught them and instilled in them what it means to be a businesswoman. While Regan also opened up early in the show, how “daddy” is always telling her and Deja to have multiple streams of income.

Anyway, for now, she only served as the Office Manager Assistant at her family-run funeral home. And, she did not seem prepared to be taking on a full-time job no matter how many times her father would insist her to take more responsibilities.

Speaking of her education, Raegan started pursuing a degree in Nursing at the University of Memphis as of 2020.

There was simply no mention of Raegan’s boyfriend on Buried By The Bernards. In a ‘partners for life’ relationship with her “twin-like” sister, she seemed already busy in her life learning to become a businesswoman and working hard for her grades.

Although she did spill in the show that she wants to be a mother someday, just like Deja. And, she imagined having not one but five kids.

Reagan also shared a brotherly bonding with Deja’s boyfriend and Alonni’s father, Scott Corey. The whole Bernard family loved him for the way he treated Ava even though she is not his biological daughter.