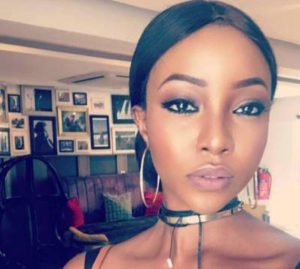 With the drop of Indo-Nigerian cross-cultural rom-com Namaste Wahala on 2021’s Valentine’s Day, people on Netflix could not stop themselves from wondering if Ini Dima-Okojie, the lead actress in the film is just as much single as she claims to be on screen.

Find out below, in wiki-styled writing about the Nollywood actress who is sure to smite everyone who watches the Indo-Nigerian romance.

Ini Dima-Okojie, because she is the fourth born and the last child of her family, has three older siblings.

She described herself as a ‘mummy’s girl’ but also seemed close to her grandma, and the rest of the family members.

Sometime in March 2018, she spoke with The Daily Times about her parents’ reaction to her choosing acting as a career. Ini said she was initially very worried about telling her parents what she wanted to. So, the first person the actress told about it was her mother (popularly known as Aunt Perry) who reassured she would support her. Her father was however a mix of “quite supportive” and a bit skeptical.

Ini Dima-Okojie, who stands 5′ 3″ in height, is also known for her strong fashion sense. The likes of Pulse Nigeria also dubbed her as one of the most stylish celebrities in Nigeria.

After her very first act in the TV Series ‘5ive’ Ini realized that if she was going to be in the industry, she had to let go of some extra weight she was carrying.

Talking exclusively to KAMDORA in early-Jan, she shared her story about weight loss and of course, gave her five golden tips for weight loss.

For someone like her who is a “big foodie”, she accomplished her goals without having to actively go to the gym or work out.

The year 2020 was a tough year for Ini not just because of the pandemic. The same year in Nov. she went underwent surgery for the treatment of her fibroids. She was diagnosed with the condition in 2017.

Following consent from both her parents, she quit her then-job as an investment banker and went to the New York Film Academy to study. She came back to Nigeria in 2014 and that was how her journey as an actor began.

Her film career began in 2014 playing Feyisayo Pepple in the TV show Taste of Love. In 2016, she played Hadiza Ahmed in the film North East. For this, she was even nominated for Best Actress in a Supporting Role at the 2017 Nigeria Entertainment Awards. Around the same time, she received another nomination for Most Promising Actress at the City People Movie Awards.

Moving on, the Lagos, Nigeria-born was seen on Skinny Girl in Transit, Desperate Housewives Africa, It’s Her Day, North East, and The Royal Hibiscus Hotel, and a few others. The latest of all being the collaboration between Bollywood and Nollywood, where she plays Didi, a Nigerian lawyer in love with an Indian boy (played by actor Ruslaan Mumtaaz).

Anyway, for the net worth, Ini Dimi-Okojie is reported to have been saved $400 thousand, at the time.

As we write this, Ini Dimi-Okojie had never been married before. So, her marital status was single of course.

Her relationship status though remained a mystery of some kind. Probably meaning to say that she is single, she said loves watching TV series and talent shows when she is off work and need relaxing.

However, even if Ini never discussed her dating life publicly, there were times she told the media outlets about her preferences in a romance. Not to mention the time (2015) when she said, she is not a ‘serial-dater’ and her last relationship was in 2010. “I’ve been single for five years.”

A while ago, when interviewed, “What is your definition of an ideal man?”, she had replied, someone that is kind, God-fearing, understanding, and most importantly, someone that communicates. She stressed her ideal man must be blessed with these traits and only then would the guy stand out for her.

Plus Ini revealed, money in a guy, is never going to be an issue for her. Because she is more than able to pay her own bills, she believes it is a must that he respects what she is bringing to the table. She said she didn’t make all these sacrifices just to be sitting somewhere counting some rich guy’s money.

Also, in a chat with HVP, circa 2015, she declared everyone’s beloved Chris Hemsworth as her crush, her husband.

“Yes, I do have a crush on an actor, but he’s not a Nigerian. My husband is Chris Hemsworth”

Lastly, Ini had also mentioned, if let to her she would not date an actor.