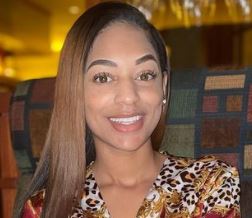 Deja Bernard is the star of the Netflix show called “Buried By The Bernards”.

Premiered on 12th Feb 2021, “Buried By The Bernards” followed the Bernard family who runs a Memphis-based funeral home. Besides Deja, the Netflix series starred her father, grandmother, sister, and grandmother’s brother.

Are you hoping to learn about the star of our article? Well, read this Deja Bernard wiki and find out her age, mother, and IG. Furthermore, discover her baby father, daughters, and more!

At the filming of “Buried By Bernards,” Deja Bernard was 24 years old. Meanwhile, her sister, Raegan was 18 years of age.

Also, Deja is a Pisces and celebrates her birthday on 5th March.

Deja Bernard was born to her father, Ryan Bernard, and a mother. While Ryan starred in “Buried By Bernards,” Deja’s mother did not even make a cameo.

Deja’s parents parted ways a long time ago. Ryan didn’t know about Deja’s existence until she was 15. At the time, her sister Raegan was in the 4th grade and already had an older brother.

Upon meeting the first time, Deja and Raegan felt like they were long-lost twins. The Bernard siblings almost shared the same birthday, had Raegan was born on the due date.

From her mother’s side, Deja may have another sister. In her family, she also has a grandmother named Debbie and her father’s uncle, Kevin Miller.

Deja Bernard is reportedly under 5 feet 6 inches in height. Gifted with a beautiful complexion, she has body measurements of 34-24-36 inches.

Fashion shabby Deja also drew comparisons because of her looks. Many remarked she looked like a younger version of Beyonce.

As of Feb 2021, Deja Bernard was on IG under the username @thediaryofdejabernard. With only 40 posts, she had already garnered 4.7 thousand followers on the platform.

On Facebook though, she maintained a low-profile. Her bio on the platform read— “A Proverbs 31 woman isn’t the model of perfection. She is the model of a committed woman under God.”

Her Job, Education, Net Worth

Deja Bernard attended Horn Lake High. She then studied at the University of Memphis.

In 2021, Deja told Oprah Magazine that she was planning to pursue a degree in journalism. Additionally, she was hoping to get her funeral director license.

As seen on “Buried By The Bernards,” Deja — together with Reagen — helped run the family-owned funeral home “R. Bernard Funeral Home”. Their father had opened the business in 2017.

At “R. Bernard Funeral Home,” Deja took over the role of the Funeral Director Apprentice. Meanwhile, her sister acted as the Office Manager Assistant.

Even after gaining nation-wide fame with the Netflix series, Deja seemed equally attached to her family. In her own words— “Even though it was a huge blessing to get this show, it doesn’t take away from us. We’re still the same loving Bernard family. When families come in, we’re still going to love you and cherish you. Nothing is going to change.”

After the filming wrapped, Deja launched a blog titled “The Diary of Deja Bernard”. She and Reagen also began working on their pound cake business.

All in all, Deja must’ve amassed a respectable net worth from her endavours. The exact amount, however, remained a family affair.

As of February 2021, Deja Bernard was still with her boyfriend turned baby father, Scott Corey. Deja and Corey, however, were yet to tie the knot.

Like Deja, Scott is also a native of Memphis, Tennesse. He celebrates his birthday in February. On his 2020 birthday, Deja took to Instagram and wrote— “When you came into my life I thought I was blessed once with my true love. But now I realize I was blessed twice because you are also my best friend. You always listen and understand with your heart. You are so humble, sweet, and patient with me. Thank you for accepting me for me with all my flaws. Thank you for making me and our babies your number one priority. Some people want it all and take the small things for granted. But all I want is exactly what you are. I love you and Happy Birthday.”

On 23rd January 2020, Deja gave birth to their daughter, Alonni Corinne Scott. Admittedly, neither she nor Scott had planned Alonni’s arrival. Nonetheless, the couple has hearts filled with unconditional love for their daughter.