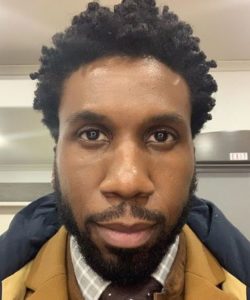 Nyambi Nyambi is the Nigerian-American actor most famous for his role in Melissa McCarthy’s Mike and Molly and later, CBS All Access‘ The Good Fight. However, Nyambi is not just an actor but also a screenwriter trying to raise the race issues and give voice to the voiceless.

Read the article below about the amazing actor and writer. You will find the information regarding his personal life, family, careers as well as wikis like height, net worth, etc.

Nyambi Nyambi was born in Oklahoma to the Nigerian parents, Nyambi Nyambi Sr. and Atai Nyambi, who emigrated to America. Nyambi grew up partly in Texas and partly in Virginia.

Nyambi studied business at Bucknell University and got his B.S. degree from there. Furthermore, Nyambi went on to gain an MFA in Acting from New York University. After getting his graduate degree from NYU, Nyambi also attended Stella Adler Studio of Acting in New York City.

In Mike and Molly, Nyambi had an accent on the account that he was supposed to be from Senegal. In real life, however, Nyambi has no accent for he was born and bred in the US.

Nyambi is a very tall person, standing at a height of over 6 feet — 6 feet, and a half-inch to be precise. Plus, he had an average weight.

While growing up in the US, Nyambi used to play basketball. Once in an article, he said that he used to dribble the basketball around the neighborhood just for the fun of it. He even planned on becoming a professional basketball player.

Nyambi is a very active celebrity in the social media. On Instagram, Nyambi had the following of almost 22k followers.

Similarly, on Twitter, he had over 23k followers. He had a similar following in Facebook as well, over 22k followers, and almost 23k likes on his Facebook page.

Although being trained as an actor and later indeed earning his renown as an actor, he started his career in the film as an Organizer in an independent movie Day Night Day Night.

His acting career started with a solitary appearance on the final season of Law & Order. He also appeared in the film, William Vincent. He also tried his hand on theatre with Classic Stage Company’s production of The Tempest.

The big break for Nyambi came with CBS sitcom Mike and Molly, where he was one of the main characters by the name of Samuel, a Senegalese waiter. Later, Nyambi joined the cast of The Good Fight for a recurring role of Jay DiPersia, a law-firm investigator.

From all his acting gigs, Nyambi had amassed the net worth of over $1.5 million.

In one episode of The Good Fight, Nyambi acted on a scene where he seemed to speak in favor of attacking Neo-Nazis even when not provoked. His words, “It’s time to punch a few Nazis.” seemed to create a huge backlash against him.

Nyambi said that in the aftermath of that episode, he was quite frequently called the N-word in many different ways on Twitter. Of course, that didn’t seem to deter Nyambi for he wanted to be the voice of the voiceless and if few people did not like him for that then so be it.

Nyambi was very vocal about his opinions about race and politics. However, when it came to his personal life, Nyambi was surprisingly tight-lipped. His Instagram, Twitter, and Facebook were entirely devoid of any posts or photos of a girlfriend or a wife.

From the information on the web, it was unlikely that Nyambi was married and had a wife. It seemed that Nyambi was currently single but with his charismatic personality that might not be the constant for very long.

Two profound actors Travis Van Winkle and Shalita Grant joined the cast of Netflix’s series You for its...