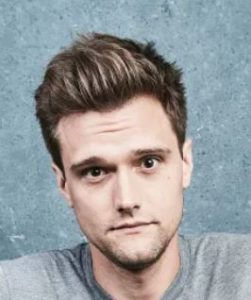 Hartley Sawyer, the actor of The CW‘s superhero drama The Flash, came to fierce scrutiny and was subsequently from his role in The Flash when some of his misogynist and sexist comments from the past resurfaced.

People also came in support Hartley saying that whatever he said, however wrong they might be, he did all that in the past and there was nothing in Hartley’s present behavior to indicate that he was sexist, or racist, or homophobic.

Read the article below to know everything about Hartley Sawyer, his life, and his recent controversy.

Let us first start with a little bio about Hartley. Hartley was born in Goshen, New York on 25 January 1985 to American parents. The names of his parents were not known but he grew up with one sibling, a brother named Jansen.

Hartley studied in Goshen Central High School in Goshen, New York. Later on, he went on to study at Emerson College in Boston.

Hartley stands at a very tall height of just over 6 feet 3 inches.

After graduating from college, Hartley was first recognized in 2010 with the role of Brian Sommers in Glory Daze, a comedy in TBS. Later on, he played Bozeman Peacham in ABC‘s comedy series GCB.

His most important role, however, apart from in The Flash, was in CBS daytime soap opera The Young and the Restless, as Kyle Abbott. Hartley played the role of Kyle Abbott for a little under a year and a total of 56 episodes between 2013 and 2014.

Between 2014 and 2017 (when he was cast in The Flash) Hartley appeared in minor, almost guest, roles in various sitcoms like Suburgatory, The McCarthys, Filthy Preppy Teen$, Single by 30.

With 2017 came Hartley Sawyer’s most famous roles when he was cast for a recurring role of Elongated Man (Ralph Dibny) in the fourth season of The CW‘s superhero series The Flash. Hartley later became the series regular for the fifth and the sixth season.

Come 2020, and right on the even of season 7, things turned pretty sour pretty fast for Hartley. Towards the end of May and early June of 2020, a host of Hartley’s Tweets from 2011-2014 started surface. The Tweets were offensive, aiming sexual violence, racism, homelessness, domestic violence, and many more.

Some of the Tweets read, “As a lad, one of my favorite activities was kidnapping homeless women and cutting off their breasts.” And, “The only thing from stopping me from doing mildly racist Tweets is the knowledge that Al Sharpton would never stop complaining about me.”

Hartley’s Twitter had been deleted a while back but once the old Tweets resurfaced, the showrunner Eric Wallace issued a statement and fired the actor. Hartley’s co-actor Grant Gustin also showed his anger towards the derogatory comments.

Hartley, on his part, also issued an apology saying,

“My words, irrelevant of being meant with an intent of humor, were hurtful, and unacceptable. I am ashamed I was capable of these horrible attempts to get attention at that time.”

“I am incredibly sorry, ashamed, and disappointed in myself for my ignorance back then. I want to be very clear: this is not reflective of what I think or who I am now.”

In the entire saga, there was also a petition by fans demanding to bring Hartley back to the show. The fans felt that Hartley should not be punished for something he did, however wrong, years before when he was young and stupid.

As of now, there was no response from the producers of the show regarding the petition.

As of Spring 2020, there was no news of Hartley Sawyer’s girlfriends or wife. The media frenzy was all about the derogatory comments on part of the actor and there was neither time nor interest in his dating life.

However, as the time will pass and the uproar lessened, the information of Hartley’s partner might emerge.