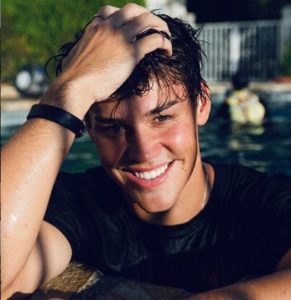 Featuring lifestyle, sports, and comedy-related video, Noah Beck has gained quite a popularity in the TikTok community. In Summer 2020, Noah seemed like the most potential candidate to be joining the Sway House.

Before his fame in TikTok, Noah was well known for being a soccer player. From 2014 – 17, Noah played with ODP — he was a team captain, the leading scorer, and a two-time all-tournament team selection. Also, he has played soccer at the NCAA Division-1 level.

Divulge into the world of Noah Beck as you tag along with this wiki-style article. Moreover, get to know about Noah’s girlfriend and family as the article proceeds.

Born May 4, 2001, Noah Beck was 19 years old when the “black lives matter” protest started in 2020. In support of the movement, Noah had uploaded #blackouttuesday over his Instagram.

Corresponding to his birthday, Noah is of Taurus zodiac. He attended the University of Portland for his education.

Taking more about his soccer career, Noah played two years at Ironwood High School before focusing on his academy team. He played for clubs like Real Salt Lake Academy and SC Del Sol. Also, he was a team captain for SC Del Sol and won a regional championship too.

Noah Beck was born and raised in Peoria, Arizona alongside his siblings. A family of five, he has two older sisters named Tatum and Haley Beck.

As for his parents, Noah frequently uploaded his dad and mom’s pics over his Instagram. On June 19, He posted a picture along with his family with a caption “family over everything”. Also, on father’s day (June 21) 2020, Noah wished happy father’s day through his Instagram.

It is safe to say that Noah had a good relationship with his family and loved them with all his heart.

You may like – Nick Bean Wiki, Gay, Girlfriend, Net Worth, Parents, Height

His most distinct feature would certainly be his well-built stature and a beautiful smile. Also, his fans adore his groggy expressions and messy hairstyle.

Reportedly, he started doing TikTok videos from Jan 21, 2020. He frequently collaborated with TikTok artists like Blake Grey and Katie Sigmond.

With the “hiatus” announcement from previous Sway House members Josh Richards and Jaden Hossler, we would certainly be seeing new faces in the Sway House. Noah Beck, the most hinted candidate, was very likely to join the Sway House, though it wasn’t officially announced as of June 2020.

In May 2020, Noah had appeared alongside Sway House member Quinton Griggs and Blake Gray in a TikTok video. When a fan commented, “reply if you’re joining Sway,” Noah simply replied with an ellipsis.

Moreover, Noah seemed frequent hanging out with Sway House members and has uploaded severe pictures of them together over his Instagram. Noah’s popularity was sure to grow once he officially became a member of Sway House.

Noah earned quite a handsome salary as a soccer player and even more with TikTok. As of 2020, Noah Beck’s net worth was estimated to be around $150 thousand.

Circa July 2020, a new rumor implied that Noah dropped out of college to become a full-time influencer. That month, he stoked the fire by tweeting: “do whatever makes you happy and don’t look back.”

Coming to his dating life, Noah didn’t disclose much about his relationships. On Mar 13, 2016, Noah replied to a tweet from @harliebott, asking for a girlfriend. But it wasn’t known if she ever got him one.

Furthermore, On June 17, 2020, Noah had posted over his Instagram “dear future wife, can we pls get a house in Cali?”. Maybe he dedicated the post to his girlfriend then or maybe he was just wishing it for his future one.

Apart from this, the rumors on Noah Beck being gay wasn’t addressed as of 2020.