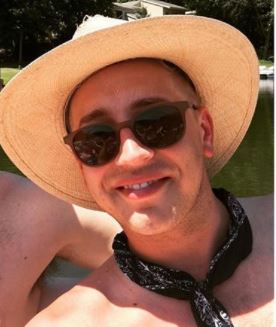 MJ provided his expertise as an interior designer to transform “rundown homes into stunning remodels” and soon became the fan’s favorite on the show.

So, who is this new face appointed as the head designer for the HGTV series? Keep reading to learn more about him through this wiki-style article.

His birthday falls on March 18. That makes MJ of Pisces zodiac.

MJ Coyle didn’t talk much about his family. For all, we can say is MJ was born to Caucasian parents and holds an American nationality.

Also, MJ was inspired by his grandfather who was an architect as well. Furthermore, his grandpa was a veteran who served the country.

Yes, MJ is a great cook and his dishes will make you drool. He often uploaded pictures of homemade foods over Instagram. While the ingredients itself looked simple, it was the presentation that exhibited exquisiteness.

Trivia: MJ owned a dog (Labradoodle) who he brought to work on weekends.

Mentioning his distinct features, MJ is a dashing man overloaded with cuteness. Fans were head over heel as he appeared working on the tables and stairs, fixing his blond hair and wearing glasses.

As of August 2020, MJ had two Instagram accounts. One @michaeljeffreydesign with 3.2K followers and other @mjhomedesign with 200+ followers.

In 2020, MJ Coyle’s net worth was estimated to be around $350 thousand. Also, we can attribute most of his net worth to his skill as an Interior Designer.

He joined “Two Chicks and a Hammer” team back in May 2019 and worked as a “Head Designer”. However, the team started rehabbing homes in Fountain Square, Bates Hendricks, and the surrounding areas from 2007.

Furthermore, “Two Chicks and a Hammer” later known as “Good Bones”, first aired in HGTV in May 2015 under the former name.

Apart from this, Mj also worked as a design assistant on the 2019 TV series “Rock the Block“.

While we know MJ is a trained architect, details on his education weren’t available.

First of all, shedding light on MJ Coyle’s sexuality — MJ is openly gay.

MJ Coyle was married to a man whom he referred to as Mr. Merkley on May 15, 2019. The wedding was held in Italy, surrounded by a few of their best friends and for their honeymoon they went to Rue Saint-Antoine, Paris. 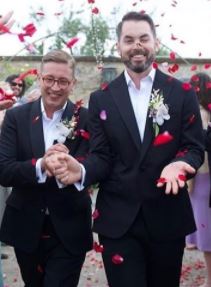 MJ Coyle with his husband “Mr. Merkley” on their wedding (Source: MJ’s Instagram)

Also, on their marriage anniversary 2020, MJ took it to Instagram to share their wedding picture with a long caption. To summarise, MJ thanked his husband for being understanding, believing, and overall, letting him be himself.

Furthermore, the same year they got married MJ and his husband bought a new house and started some major renovations.

MJ’s other half might be much taller than him but they shared a passion for cooking food and traveling. Also, they shared a favorite drink called “Negroni”.

The name, Alison Victoria is well acquainted with the people who love viewing the world of design and house...