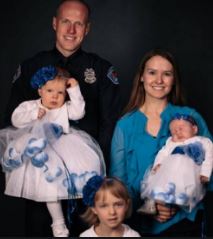 Faith in humanity was restored when a police officer named Ryan Holets draw courage to offer to adopt the baby from a homeless pregnant lady named Crystal Champ and her partner Tom Key. When the story gained traction, people all over the United States admired his deeds.

As he adopted the baby and named her Hope, the story went viral so much so, that President Trump had him in the State of the Union address. So who is Ryan Holets and what is the latest update on Baby Hope?

Ryan Holets was born to David Holets and Rita Holets in Albuquerque, New Mexico. Professionally, David worked as a staff engineer with Intel Corporation based in New Mexico for over thirty years. As for his wife Rita, her LinkedIn page recognized her as a family service professional.

Other than that, Ryan missed sharing further details on his family including his possible siblings. Moving on, Ryan tied knots with his wife Rebecca Holets awhile back. The married couple celebrated their anniversary every year on 2 July.

Back to Ryan Holets, he attended Central New Mexico Community College where he earned his associate’s degree in aeronautics. But switching onto a completely different lane, he joined Albuquerque Police Department starting in 2011.

And it was during the usual course of his job as a police officer, Ryan Holets ran into a situation where he needed to prove his humanity, which he did. Ryan’s story spread like a wildfire and got him praise for his work.

Even though he doesn’t appear to be on Instagram himself, his heroic act was shared, told, and retold across several platforms. And this series of events eventually earned Ryan the attention of the White House.

In the tension-filled time when countless cases of police brutality made headlines on the news, Ryan set an example that not all the police officers take advantage of their authority.

On 23 September 2017, Ryan Holets and one of his young officers responded to a possible theft at a convenience store. But since it turned out to be a false alarm, he and his junior officer turned around from the store.

While returning back, Ryan saw a homeless couple sitting on a patch of grass about to inject themselves with an unknown drug. A feeling that he had to say something took over, so he approached the couple as he flipped on his body camera.

The couples were Crystal Champ and her partner Tom Key. As he was approached them, he noticed Crystal was pregnant it shocked him to his very core and left him heartbroken.

Concerned Ryan asked Crystal why she was doing such stuff and suggested that the thing she was doing was going to kill her baby. Immediately after hearing the kind words, Crystal couldn’t contain herself and started to burst into tears.

She admitted that drugs like heroin and crystal meth took control of her life and she knew what she was doing was definitely wrong. And it was at that moment, Ryan had the craziest idea that was going to touch many lives.

He offered to adopt the baby with the consent of Crystal. He showed the picture of his wife and kids to her making. On 12 October 2017, Ryan as well as Crystal and Tom, welcomed Hope Holets.

Baby Hope Holets found her new home when Ryan Holets adopted her in 2017. When media outlets got hold of the news, the story of Baby Hope spread nationwide.

In January of 2018, President Donald Trump invited Ryan and his family as a guest to attend State of the Union address. Following adoption, many rehabilitation offered to help Hope’s biological parents.

In December of 2019, Crystal and Tom checked into the Mending Fences rehabilitation center in Florida leaving behind their old lives. For the support of Crystal and Tom, he set up a GoFundMe page.

Crystal has completed her rehab and returned back to live independently. Lou Alpert, Crystal’s mother also found about her pregnancy only after it got the media attention. She went on to address all the hardships Crystal went through because of her addiction in her book titled Surrender: A Love Letter to My Daughter.

As for Hope, Ryan put her into methadone treatment and help her through detoxing, immediately after he adopted her. As of 2020, Hope was healthy and growing under the love and care of Ryan and his wife Rebecca Holets.

His Speech At RNC

In the RNC’s speech, Ryan Holets spoke what he came across while he recollected the life-changing events which dated back in 2017. He also addressed the efforts Donald Trump made to get rid of the crisis.

Ryan went on talking about the 6.1 billion dollars federal funding secured by Trump to fight Opioid abuse across the United States. He also gave stats such as a decrease of a drug overdose in 2018 for the first time in 30 years.