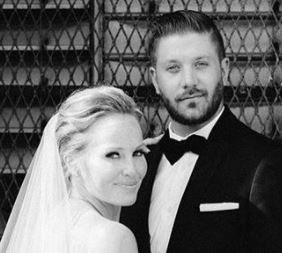 His wife, Mina renovated homes in Indianapolis, Ind alongside her mother Karen Laine, plus other members of the family helped with the renovations too. However, Steve wasn’t part of the family business and rarely appeared in the series.

So, here were are shedding light on his personal life over this Steve Hawk wiki!

Steve Hawk was 38 years old in 2020. He celebrates his birthday on November 2nd and that makes him of Scorpio zodiac.

Also, his wife, Mina was 32 then; making their age difference of 6 years.

Steve Hawk has a brother and a sister.

You might have heard about, Steve’s sister, Stefanie Hawk who passed away in early 2020. A tribute to her was added to the season 4 episode “Little Pink House on Palmer” in Good Bones.

However, the reason for Stefanie’s death wasn’t shared except for the tag “unexpected” demise of her. The news was first made public by Mina through Instagram on March 26th, 2020. She wrote, Stefanie was a “bright light” in all of their lives, and there was “nothing to say that makes it easier or better”.

As for Steve’s brother, his name is Christopher Hawk.

For those wondering if Steve is related to the pro-skater, Tony Hawk, the answer is “no, his is not”.

Talking about Steve’s parents, both of them are no more in this world.

His mother, Sally Hawk passed away before 2020.

Trivia: Steve’s was originally named “Stephan Hawk”, but because of people confusing him with the physicist, Stephen Hawking, he abbreviated his name.

Also, Steve had a tattoo all over his right arm.

Coming to his job, Steve Hawk worked as an account executive with the CoStar Group in 2020. He joined the group in April 2012 and the company offered real estate firms and reliable information, for buying and selling commercial real estate, apartments, businesses, and land.

Apart from this, Steve was involved in his wife’s business, Two Chicks, and a Hammer, Inc. He helped Mina and her mom with buying the houses in his spare time.

Furthermore,  Steve was also a competitive eater. He was the winner of the St. Elmo VIP undercard event during the Shrimp Cocktail Eating Championship.

According to the “glassdoor” data 2020, an account executive salary in Indianapolis, IN Area was $56,655 per year.

For education, Steve attended Indiana University Bloomington from 2000 to 2003.

Mina confessed that she was stupefied by how handsome Steve was as they attended a basketball game together with a few mutual friends. Unfortunately, Steve didn’t pay any attention to her then. She shared,

“He ignored me all night. He let his friend hit on me.”

However, giving him another chance, Mina texted Steve, and the duo began dating soon after.

Early in the relationship, the couple didn’t seem to be bonding well and even, Mina’s mom, Karen was skeptical of Steve. A few months later, Steve allegedly “behaved really badly“, and Mina broke up with him.

Fortunately, the duo couldn’t stay apart for long and decided to get back together.

Since then, Steve and Mina were doing better than ever before. The couple got engaged in March 2015 and held the wedding in June of 2016.

Almost 2 years after marriage, Steve welcomed his first kid with Mina named Jack in the summer of 2018. And in September 2020, they welcomed their second child, Charlotte “Charlie” Drew Hawk, after struggling a while with infertility.