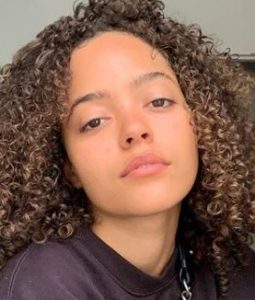 Since the premiere of season two of Netflix’s Trinkets, stars of the show were occupied promoting the show. Among the actors who starred on the series, Quintessa Swindell is in the league of their own.

Not only they are a phenomenal performer, but they also use their pedestal and spotlight to influence and promote equality to all, whatever community they represent.

To get the latest updates on Netflix’s star, scroll down this wiki-article that comprises personal and professional details on them.

Quintessa Swindell was born to their parents in Virginia. While they remain-tight lipped on the inside details, they openly appreciate their beautiful mother on their social media posts.

But on the contrary, they’ve shared very little about their father. However, many allegedly claimed that Quintessa was born to an African-American father.

Quintessa Swindell blew her birthday candle on in February of 2020 as they turned 23 years old. They celebrated their birthday every year on 8 February.

Falling under the zodiac group of Aquarius, characteristics such as analytical, independent, and authentic surely was a plus point in their career as an actress.

The mixed-heritage which they inherited from their parents further added to their exotic look. Quintessa’s petite body and curly hair added more to Quintessa’s stunning look.

They also got several tattoos across their body parts including fingers and below the armpit which gave her distinct features.

Quintessa’s love for performing could be traced back to their young age. However, only after high school, they decided to pursue it as a career.

As a Virginia native, they joined The Governor’s School for the Arts based on Norfolk. And in the 4 years of college, the love for performance in theatre grew immensely inside them.

Later, they enrolled at Marymount Manhattan for acting.

Along with the acting skills Quintessa picked, they also embraced their sexuality and started promoting gender non-conformity for the respect they and the others like them deserved in society.

Quintessa landed their first gig as a performer in the TV show Euphoria (2019). They landed the part of Anna in the show which was appreciated by all.

All thanks to their good stars, they didn’t have to wait long to earn the breakthrough role of their career. In Netflix’s teen drama Trinkets, they secured the part of Tabitha Foster, a cisgender character, completely out of their experience. The show premiered in June of 2019.

And like any actor, Quintessa also has a dream role in their mind. If Angela Davis allowed them, they would love to star in Angela’s biopic.

Besides acting, they are also equally invested in traveling and photography. They also promote equality of all kind and takes part in any cause that promotes it.

Being in a powerful position with a voice, she felt the need to say something regarding Breonna Taylor. Quintessa took it on their Instagram post to remind people of the injustice black community has been facing. And that also included Queer community that they represent.

For the moment, Quintessa Swindell sits on a net worth of $250 thousand that they earned from acting career, modeling, and other ventures.

As for Quintessa’s reach on social media, their Instagram account garnered 257k followers at the time of this writing. In the same way, Quintessa also kept in touch with their fan where they enjoyed 76 followers.

Quintess also has a profile on Facebook where they flaunted 517 followers on the platform.

Unlike any average person, Quintessa Swindell recognized themselves as a non-binary person. Rather than using his/him/her, Quintessa preferred the use of the pronouns such as They/Them/Their to address them.

Moreover, they took pride in recognizing themselves as binary and gender non-conforming. On 30 September 2019, Quintessa got California State Id where capital letter ‘X’ was printed denoting their non-binary sexuality.

As Quintessa recalled, they came from a close-minded community of Virginia. And to escape the reality they moved to New York, but even in one of the greatest cities in the world, they made it hard for likes of them.

As of the summer of 2020, Quintessa Swindell committed herself to her partner, Jakob Hetzer. The origin story of their dating history remains aloof as neither of them thought about addressing it.

Since Quintessa and boyfriend Jakob debuted on Instagram in September of 2017, one can safely assume they started seeing each other around the time. Along with their love and appreciation for one another, Quintessa and their partner also share an interest in fashion and art.

Jakob Hetzer is a fashion designer, creative consultant, and a model-based in Los Angeles. His work often gets him packing bags and travel within and outside the U.S.

Quintessa often admires Jakob for being a supportive and welcoming partner. Within a few months into dating each other, they revealed him of not feeling like a girl.

But Jakob’s reaction came unexpected and surprised Qunitessa and left them with a feeling that why they hesitated in the first place to share about her sexuality.

It is indeed commendatory when an actor in a supporting role leaves the mark that even the main casts were...