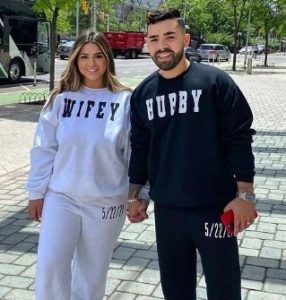 The Long Island Medium star Theresa Caputo is officially a mother-in-law. The lady who was worried about being an empty-nester’s fear came true on 22 May of 2021. Her daughter, Victoria wedded her fiance, Michael Mastrandrea.

Michael Mastrandrea was born on 28 August 1994. He turned 26 years old in 2020. Furthermore, Michael owned Virgo as his zodiac sign.

Michael ‘Mikey’ Mastrandrea was born to his father Michael ‘Mike’ Mastrandrea and his mother Maryann Mastrandrea in his hometown of Hicksville, New York, the United States. Mike and Maryann have stayed married for over two and a half-decade. With their successful marriage, they are inspired to find someone who sees it through to the end.

Other than occasional snaps of them on his social media, almost no information on his parents could be discovered as of this writing. However, one thing for sure, Michael’s family is a proud Italian-American family.

Talking about their siblings, Michael has two. His sister Melissa Mastrandrea attended Holy Trinity High School and graduated in 2014. Later, she started working in Pasta-Eria. About her relationship status, she got engaged in October 2020.

And, Michael has a brother named Marco Mastrandrea. Marco grew up attending Chaminade High School and graduated in 2018. He currently attends Binghampton University Harpur College and is set to graduate in 2022. Like his sister, he also worked in Pasta-Eria.

Another great example of a successful marriage is his maternal grandparents. They completed 53 years of happily married life in August of 2020.

Michael Mastrandrea stands at a height of 5 feet 5 inches (1.65 meters). Whereas, he weighed about 67 kilograms (147 lbs). As a tattoo enthusiast, he inked several that are very impressive. He completed his sleeve tattoo in 2017.

Talking about other features, his facial hair and the mo-hawk-styled haircut make him look dashing.

However, he hasn’t updated his profile since August of 2020.

Going through his social one thing that we can vouch for is he is extremely private about personal details. However, he has no trouble sharing details about his love life.

The one thing that Michael is private about is his job and his academic qualification. No doubt, he must’ve completed high school and attended college. Neither does he own any LinkedIn page or shares his details on his Facebook.

Talking about a job, Michael Mastrandrea and his siblings not only worked at Pasta-Eria, but they also own the fast-food place. The restaurant offered a lunch menu, takeout menu, catering menu, and dessert menu. The restaurant was best known for pasta dishes, hot appetizers, crisp salads, veal and seafood entrees, and chicken.

Due to the COVID-19, they were innovating their business to protect their customers from getting infected. They offered curbside pickup, outside dining, and delivery. Talking about his job, it appears Michael Mastrandrea was handling the operation of the business. So, he could be an operation manager.

After running a successful business with rave reviews in the testimony from the satisfied clients, Michael Mastrandrea pocketed a handsome net worth from the family business. His burgeoning net worth should be around $500 thousand.

It has been widely shared that Michael Mastrandrea and Victoria Caputo started dating each other on 7 July 2017. However, they have known each other at least since 2016. Victoria first commented on Michael’s IG post in November of 2016.

Whereas, Michael appeared on Victoria’s post in the New Year of 2017.

After dating for almost two years, the love birds got engaged in February of 2019. Ever since they started dating each other, the love birds have been very close with each other’s family members. While Michael is in the thoughts and prayers of Victoria’s mom Theresa, Victoria appeared at several huge family functions of Michael.

In an interview with EXTRA, Theresa confirmed the wedding. Victoria announced that she selected the wedding dress at Kleinfeld Bridal in September of 2019. Initially, they had planned for a 2020 wedding. However, the sharing of wedding vows had to wait because of the pandemic.

The couple rescheduled it for the May of 2021. Even though they appear together with a baby in the arms of Victoria in March of 2019. The post revealed it wasn’t their baby but was their niece.