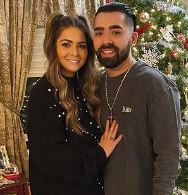 Victoria Caputo, daughter of Long Island Medium star Theresa Caputo was supposed to get married in 2020. But they rescheduled it for May of 2021. So, fans of Theresa and her daughter Victoria were looking for further updates.

For that, this Victoria Caputo wiki attempts to provide all the information readers have been looking for. So, delve into this article starting with his age!

Victoria Caputo was born on 27 September 1994. She turned 26 years old while celebrating her birthday in 2020. Per her date of birth, Victoria secured Libra as her zodiac sign.

Born and raised in New York, Victoria Caputo was born as one of the two children of Larry Caputo and his wife Theresa Caputo. Her father earned prominence as a hockey player who played for 25 years. Later, he started coaching his son’s hockey team. As for her mother, Theresa is the New York Times bestselling author of There’s More To Life Than This and You Can’t Make This Stuff Up.

Even though her parents stayed happily married for a very long time until they separated in 2017. Her parent’s divorce was finalized in 2018.  Theresa even mourned for her marriage that ended after 28 years. But, after the divorce, is back on the dating scene, feeling a little rusty. She confirmed to EXTRA that she was dating and was in an exclusive relationship.

More on her family: Victoria has a brother named Larry Caputo Jr. He worked as a coordinator for MSG Media.

Victoria has the eyebrows of her father and other facial features of her mother. She credits both of her parents for her undeniable beauty.

Moreover, Victoria Caputo stands tall at an average height of 5 feet 6 inches (1.67 meters). Likewise, she weighed about 70 kilograms (154 lbs). She focused herself on weight loss and fitness goal. She flaunted her post-weight loss figure on Instagram.

Victoria posted a photo of herself sitting on a bathroom floor holding her phone that showed the FitTrack app and a scale. She captioned the post with:

“Quarantine got me a head start on my fitness and health goals! This scale has kept me on track with what is going on inside my body instead of focusing on just one number!”

Victoria Caputo inherited her fame and recognition from her two very popular parents. But, that probably wouldn’t do her proper justice since she also put an extra effort to earn fame.

Along with recognition, Victoria’s social media followers have also increased over the years being in the spotlight. As of May 2021, her Instagram account had 361k people following her on the platform. Likewise, her Twitter account earned her 96.3k followers as of this writing. Likewise, she has one Facebook page and a public account. Her page earned 19,594 followers in total. Whereas, her Facebook account flaunted 2043 friends. She hasn’t posted on the platform since March 2021.

After completing, Victoria Caputo started her career by landing a job at M.A.C. Cosmetics. Starting from February of 2019, she started her job at SALON ENTOURAGE.

In January of 2020, Victoria Caputo started her job at Escape Hair Lounge. She for sure completed her high school and even went to college. However, her academic qualifications remain obscure as of the time of penning this article in February 2020.

Talking about their wealth, she and her fiance Michael Mastrandrea purchased a house in May of 2020. They announced on Instagram on 30 May 2020. Moreover, Victoria Caputo boasts a total net worth of $200 thousand.

Who Is Victoria Caputo Husband?

As of Feb 2021, Michael Mastrandrea was yet to become Victoria Caputo’s husband. He was still her fiance. May that year, he became their legal spouse.

Michael Mastrandrea turned 27 years old in 2021. His family members include two siblings: Marco and Melissa. Both of his siblings are on Instagram but have kept the profile private, owing to their private nature.

Michael is also a tattoo enthusiast with multiple arts of work on his body. While he inked tattoos of different types, the one that is close to his heart is family, literally and figuratively. Also, Victoria and Michael share a love of tattoos. Michael completed his arm sleeve tattoo in 2017. Whereas, Victoria got herself a Bee in January 2018.

Victoria Caputo started dating Michael Mastrandrea on 7 July 2017. The couple started featuring in each other’s social media thereafter. The couple commemorated their anniversary with a post on their first and second anniversary, three days after the 4th of July.

But, Michael Mastrandrea appeared on Victoria’s Instagram even before they officially started dating. He showed up on a post-dated on the New Year of 2017. The couple dated for almost two years and got engaged in February of 2019.

Only a few can hear this but Michael Mastrandrea is one of the lucky ones that can tell he is very close to his in-laws. He grew closer to the mother of Theresa, Victoria’s mother. On the day of Theresa’s birthday, he wrote:

“Happy Birthday to the future mother in law @theresacaputo love you so much!”

It was Theresa who confirmed Victoria and Michael’s wedding in the interview with EXTRA. In September of 2019, Victoria shared that she has chosen her wedding dress at Kleinfeld Bridal.

The couple planned their wedding for 2020. However, their plan collapsed due to the COVID-19 pandemic. But, that didn’t mean they canceled their wedding.

In fact, the engaged lovebirds rescheduled it for May of 2021. Theresa’s worried about being the empty nester postponed and she couldn’t be happier about the news.

On 25 March 2019, Michael and Victoria appeared on Instagram with a baby. However, that baby didn’t belong to them and shared she was their niece.

Victoria and Michael officially tied the knot on 22nd May 2021 in New York. According to PEOPLE magazine, the ceremony took place at Our Lady of Mercy Church in Hicksville, New York on Long Island. Meanwhile, their waterfront reception took place on the rooftop of Hudson House in Jersey City. Besides the wedding cake, the couple shared a New York-style pizza.