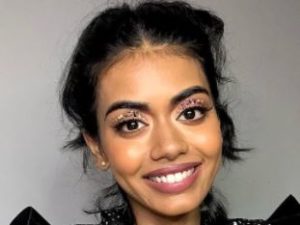 It was like a dream come true for the aspiring actress Megan Suri when she was cast as “Aneesa” on Never Have I Ever season 2. A long-time fan of the show, Megan now plays the classmate of Devi and already has garnered a lot of fans.

But who is she off the screen? Stick with this Megan Suri Wiki to find out.

Megan Suri Never Have I Ever, Aneesa

In Never Have I Ever season 2, Megan Suri first appeared portraying a new Indian American student “Aneesa”, who Devi immediately sees as her competition. Her character was blessed with traits like being laid-back, charismatic, and able to fit in with the popular kids (everything Devi wasn’t).

Moreover, Megan’s character even drew the attention of Ben, who Devi was crushing on. Which got Devi even more riled up.

Spoilers Alert: But at the end of the second season, it seems like Megan’s character will be getting the “short end of the stick”. And because of that, Megan felt pretty restless. She said, “I want to see her either get that situation sorted out or just get what she deserves. Because Aneesa is pretty dang cool.”

Maybe Megan is up for Never Have I Ever season 3 as well; where she is delivered justice.

Did you know: Megan first let her fans know that she was cast on Never Have I Ever back in November 2020 through IG.

Also, Megan was cast on ABC’s Fresh Off the Boat as “Simryn” in 2020. Her character there got so popular that Rachna Fruchbom even wrote a spinoff of the show titled Magic Motor Inn. Unfortunately, the show never materialized.

Apart from Hollywood, Megan has also stepped into Bollywood and has worked with the stars like Preity Zinta. Reportedly, Megan played the role of Preity Zinta’s daughter.

In light of her education, Megan attended a private school and went on to attend an acting course at the New Youk Film Academy.

Megan Suri was 22 years of age when she first appeared on Never Have I Ever in 2021.

She celebrates her birthday on March 28 and is of the Aries zodiac.

Megan Suri reportedly belonged to the caste “Khatri”. So, for that matter, she must be of the Hindu religion.

As for her ethnicity, Megan Suri is Indian-American, just like the role she played on Never Have I Ever. According to her, she was born in the US (Downey, CA) but she spent almost 2½ years of her childhood in India.

Megan Suri was born to her parents, Raj Suri, and mother (who chose to remain anonymous). They often appeared over her IG, alongside sweet captions.

Recalling one of her embarrassing moments with them, Megan shared that she once took her parents out to the premiere of the movie The MisEducation of Bindu, and then the director suddenly decided to play a scene where Megan was making out intensely. “I just remember sitting there and I don’t even know how to describe it… It was just like the worst kind of cringe and having it shown that to my parents — “my very Indian parents” — Yeah!”, she said.

Talking about her siblings, Megan has a sister named Tanya Suri.

Trivia: Megan has a family member named Suraj Singh Suri who worked at  Bullworth Academy and resided in Downey, California.

As of 2021, Megan Suri remained private about her dating life. However, she wasn’t so private about the kind of boyfriend she wants. If she had to describe her ideal boyfriend in one word, it would be “tall”.

Yes, she finds it “such a waste when a cute guy is short or just as tall as you.”

Also, Megan admitted that she wanted a boyfriend who looked just like Jared Leto. “Or preferably is Jared Leto,” she added.