Alexandra Gerhart is the wife of NBA pro-basketball player, Nik Stauskas. They started dating in 2017 and got engaged followed by their wedding during the pandemic. But, her appearance on Say yes to Dress earned her wider attention.

Delve into this Alexandra Gerhart Wiki to learn more about her.

More From Us: Jeffrey Glasko Wikipedia: Age, Net Worth, Occupation

Before her wedding, Alexandra Gerhart was looking for a dress that would grab everyone’s attention. So, she looked for something shiny. But, her mother wanted her to look sexy and she has a history of intervening in her daughter’s choice.

While Tracy made it clear that it was “their” wedding and choosing a dress was all on her, her mother clearly wasn’t going to share her thoughts on it. They entered Kleinfeld looking for a dress they had several choices.

But, her mother believed the dress she dons must compliment Jimmy Choo shoes that they bought.

Bride Alexandra Gerhart searched for a reception dress and stumbled across this Pnina Tornai, the first dress she picked. With Swarovski crystals, this gown has a sheer top and was totally stunning. But it also retailed for over $21,000.

The bride’s mother wasn’t exactly thrilled, about the price tag OR the dress. Regardless, this dress still makes the list of most expensive to appear on the show.

Both, Alexandra and her mom disapproved of the dress. The second dress had her mother commenting that she looked like a cake decoration.

Similar to the second, the third dress also got no from her mother.

But, Dianne, her consultant asked her to put on a fitting gown that would fit her perfectly. The fourth dress was a yes from both Alexandra and her mother Tracy.

Nik Stauskas and Alexandra Gerhart were confirmed as a couple for the first time when they attended a mutual friend’s wedding together. They spent their first getaway together in Ibiza in August of 2017, which marked their social media debut as a couple.

They officially went on a date for the first time on 8 August of 2017.

On their first Valentine’s day together, Nik wished his then-girlfriend, Alexandra on his Instagram. There, he wrote: “My Queen 😍 Happy Valentine’s Day Hunny!” 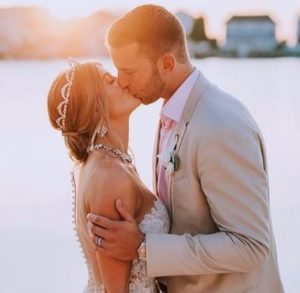 Alexandra and her husband Nik on their wedding day (Pic: Nik’s Facebook)

On Alexandra’s 24th birthday, Nik opened his heart out and shared his love for her. There, he shared how hardworking of a person Alexandra was and how she could find ways to make him laugh all of the time.

A year later in 2018, Nik and Alexandra successfully got engaged. The video of their engagement was shared across several platforms like Vimeo and YouTube. In fact, the engagement day started as a scavenger hunt, and by the end, she had a beautiful big ring and a puppy.

In August of 2020, the engaged couple married in an outdoor wedding. On 13 August 2020, Nik took to his IG to share: “What a weekend it was! I truly am the luckiest man in the world to call you my wife @alexandra.stauskas ❤️❤️ thank you to everyone for the kind wishes over the past week! This is just the beginning, here’s to a lifetime more of memories that we will create together. I love you, Alexandra! ❤️”

The married couple didn’t have any kids as of July 2021.

Alexandra Gerhart celebrated her birthday on 1st April. She turned 27 years old in 2021. Furthermore, she secured Aries as her zodiac sign.

Talking about her parents, Alexandra Gerhart was born to her mom Tracy Gerhart and her anonymous dad in her hometown of Phoenixville, Pennsylvania, the United States. Her mother appeared on Say Yes To The Dress. Whereas, Alexandra’s dad is completely off-grid.  Besides that, no other information surfaced on her parents.

Talking about her husband, Nik Stauskas was born to his parents Paul Stauskas and Ruta Stauskas. On his dad’s side, both of his parents were Lithuanian and they moved to Canada during World War II. Whereas, his maternal grandmother is also Lithuanian.

While Nik only visited Lithuania during the holidays, he was still proud of his heritage.

Alexandra Gerhart, who is 5 feet 6.5 inches (1.68 meters), stands shorter than her husband who measures 6 feet 6 inches tall (1.98 meters). Furthermore, she is blessed with stunning measurements of 32-25-35 inches.

On Instagram, Alexandra Gerhart goes by the username @alexandra.stauskas. The platform garnered her 6,165 followers as of July 2021. Furthermore, she had posted 234 times but she locked her account. She is also on Facebook where she goes by the name Alexander Stauskas. Alexandra updated a post last time on the platform in December of 2020.

The Phoenixville-native, Alexandra Gerhart hasn’t shared much when it comes to her job. She has been active in charity works. She made financial contributions to the fundraiser for causes particularly related to animals, according to her Facebook.

While in Indiana, Alexandra appears to have worked in the college’s newspaper Indiana Daily Students. They covered the news related to Kilroy’s Bar & Grill.

However, when she isn’t occupied with work, Alexandra is out having fun with her friends or spending time on the beach. She is estimated to have a total net worth of around $100 thousand.

Alexandra Gerhart, after attending high school, enrolled at Indiana University. After graduating in 2016, she attended Oregon State University on 28 August 2018. While there, she was pursuing a law degree.

As Nik shared, Alexandra transferred to her law school to move to Spain to support his career. She finished her last semester during the pandemic and made her graduation dress look like a designer dress.

Later in 2009-2010, Nik came to South Kent School but his homesickness made him join St. Mark’s School. He missed the season due to the hip injury he endured. In March of 2011, he committed to joining Michigan State University and became the second member of Michigan’s recruiting class of 2012.

Before his senior year, ESPN named Nik one of the top 25 three-point shooters in the national class of 2012. On November 26, Nik earned Big Ten Freshman of the Week honors for his NIT tournament performance in which he averaged 12.5 points and 4.5 rebounds.

Nik also earned recognition from Sports Illustrated‘s Seth Davis as National Freshman of the Week on 3 December 2011. While he was on Michigan’s Wolverine, the school marked kept the record for the first time that the team defeated three consecutive AP Poll top ten opponents and marked the first time since the 1986–87 Iowa Hawkeyes that any team has won three consecutive games all of which were against top 10 opponents.

Coming to his professional career, Nik was drafted eighth overall in the 2014 NBA draft by the Sacramento Kings and it kick-started his NBA career.

According to Hoops Hype, Nik Stauskas sits on a total net worth of $14 million.