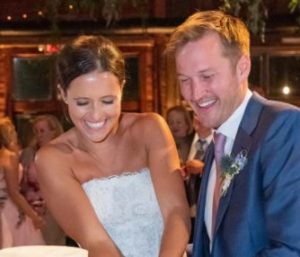 The eldest daughter of journalist Katie Couric, Ellie Monahan, made her trip down the aisle in July 2021. But it wasn’t your average wedding, the celebration was filled with games, 80’s themed dinner, and fireworks.

On July 4, 2021, Ellie Monahan exchanged “I do” with Mark Dobrosky at Cedar Lakes Estate in Port Jervis, New York.

According to her, the wedding was the best day of her life. “Delicious food, unforgettable music, and heartfelt speeches from family members, there are too many special moments to count,” she said.

The wedding weekend started with a “Field Day” — where Ellie’s guests were separated into teams of eight and took part in classic outdoor games. As per Ellie, the teams were a mix of her “friend groups and all age ranges”, giving them a chance to know each other better.

So, the guests spent the pre-wedding party tossing water balloons and playing capture the flag.

That night, they then made their way to an 80’s themed costume party. Most of them were seen cosplaying Billy Idol, Richard Simmons, Run-DMC members, and Cyndi Lauper.

The next day, the guests spent their morning swimming, indulged in a relaxing cookout lunch by the pool, waiting for the big ceremony.

In the afternoon, Ellie then walked down the aisle and married the love of her life Mark Dobrosky.

The night was filled with amazing fireworks.

Ellie Monahan and her husband, Mark Dobrosky on their wedding (Source: Instagram)

Did you know: Ellie and Mark first likely met on campus at Yale University. After years of dating, the two then went on to get engaged in February 2019.

Corresponding to her birthday, Ellie is of the Leo zodiac.

But Ellie’s father might somewhat be a mystery to you. He was named John Paul (Jay) Monahan and practiced “trial and appellate criminal and civil law” for the Washington, D.C., firm of Williams and Connolly. Sadly he passed away due to colon cancer at the age of 42 in 1998.

Recalling all her time without him, Ellie shared that it was “wasn’t easy”. But she thanked her “strong, supportive, and loving” mother for serving as a positive role model, and being a perfect parent.

After Ellie’s father’s death, her mother Katie found love with John Molner and went on to marry him in 2014 at her East Hampton home.

Even while Ellie was walking down the aisle to the music “Ashokan Farewell,” she couldn’t stop missing her father because it was his favorite music. But it seemed like a perfect way to honor him.

Talking about music, Ellie’s then 25-year-old sibling Caroline also performed Fleetwood Mac’s “Songbird” at the wedding. During which, Ellie both “laughed and cried.”

Her sister, Carrie Monahan (born: Jan 6, 1996) is a Columbia Journalism School alumni who went on to work as an associate producer at Ark Media. She is also a self-proclaimed “G-list celeb” who appeared on Hilary Duff’s float in the 2004 Macy’sThanksgiving Day parade.

Other members of Ellie’s family included:

Mentioning her distinct features, Ellie has brown eyes and dark hair. Also, some may argue that she looks a lot like her mother.

As of July 2021, Ellie had 1.2K followers on her Instagram @elinorigby21 (which was kept private).

Ellie Monahan has interned in multiple places before kick-starting her career as a writer. Initially, Ellie started as an editorial intern at the glamour magazine Conde Nast. In May 2011, Ellie then interned for Crime Strategies, and later interned for HBO in May 2012.

All of her internships only lasted 3 months each.

Also, in May 2010, she worked as a counselor for Fernwood Camp for Girls for a short time.

Meanwhile, all during her internship, Ellie was studying for her bachelor of arts degree at Yale University. Later, she graduated in 2013.

After Yale, Ellie then ventured into a career in the entertainment industry and started working as an assistant writer for TV series like Mr. Robot (2017), and The Boys (2019).

She has also worked as a director for the series Liked in 2017.

Ellie Monahan garnered a net worth of above $2 million by 2021.

But if we were to add her eligibility for mother Katie Couric’s stunning net worth of $100 million, then surely Ellie’s net worth would easily cross $20 million.