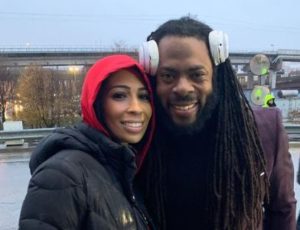 The five-time Pro Bowl cornerback Richard Sherman’s wife Ashley Moss Sherman firsthand witnessed Richard’s rampage the night he was arrested and jailed. According to the 911 call she made, Richard “was being aggressive” after drinking “two bottles” and was “threatening to kill himself.”

But enough talk about Richard’s gaffe already. Today, lets us delve into his wife’s personal life over this Ashley Moss Sherman Wikipedia.

Ashley Moss Sherman first met her future husband Richard circa 2011 and the two immediately started dating. In July 2015, Richard then surprised Ashley with an engagement ring on a stage (while a cultural dance performance was taking place). And she said yes!

After the proposal, Ashley even took it to her IG to share her happiness. She wrote,

“Truly one of the most amazing moments in my life. Can’t wait to continue writing our story as husband and wife!”

Finally, three years after their engagement, Ashley and Richard held their wedding in 2018.

Talking about Ashley’s kids, she welcomed her son Rayden back in 2015, and her daughter  Avery in 2016.

As of 2021, the duo and their two kids lived in Seattle and stood as a strong pillar to each other. In fact, in 2019, it was Ashley who pushed Richard for a $1 million Pro Bowl bonus as part of his deal with the San Francisco 49ers.

Even during Richard’s arrest in July 2021, Ashley stood strong on his defense and remarked that he “didn’t harm anybody” during the incident.“My kids were not harmed in the incident. He’s a good person and this is not his character. We’re doing all right, just trying to get him out. I want people to know no one was injured,” she said.

Just in case you don’t know, Richard was arrested on the 14th of July after attempting to break into a family member’s home. That day, approximately around 2:00 am, police received a stress call from a resident of the home who stated that a male relative was trying to get into their home by force. He was then was taken down by a police K9 unit.

Also, Richard was then being investigated for a possible DUI and hit-and-run.

Ashley Moss Sherman was born as “Ashley Lillian Moss” on April 22, 1988. That made her 33 years of age when her husband Richard was arrested in 2021.

Corresponding to her birthday, Ashley is of the Taurus zodiac.

Ashley Moss Sherman was born to parents, Raymond and Stephanie Moss. Her father, Raymond is 6 feet 10 inches (208 cm) intimidating guy who has served the US marine corps. As for her mother, Stephanie is a Great Falls, Montana native who went on to work at Swedish Ballard Family Childbirth Center.

Seems like both her parents have served the people and the country. But more than what they offered to the country, Ashley thanks them for “everything they did for (her) family”.

Talking about Ashley’s siblings, she has at least one sister named Hayley Marie Moss

Also, Ashley has a nephew named Leo Romney who is a dancer and twitch streamer by profession.

Ashley Moss Sherman is of mixed ethnicity. Her father Raymond is black, while her mother Stephanie is white.

As for her hometown, hails from Redmond, Washington.

Most of her posts then featured her family, and her donation works.

Mentioning her distinct features, Ashley has brown eyes, a triangular face, and a beautiful smile.

Ashley Moss Sherman’s net worth was over $3 million as of 2021. Meanwhile, her husband Richard Sherman flaunted a net worth of stunning $40 million.

A cosmetologist by profession, Ashley was working at her self-owned nail salon called US Nails in Denton, Washington in 2021. Her full-service salon was quite popular locally and offered a variety of treatments and nail arts. Do visit her IG page @usnailsrenton and FB page @rentonusnails to see all her works.

When Ashley wasn’t working at her salon, she spent time acting as the Executive Director of her husband’s charity organization Blanket Coverage Foundation. The foundation was formed back in 2013 “to provide students in low-income communities with school supplies and clothing so they can more adequately achieve their goals.”