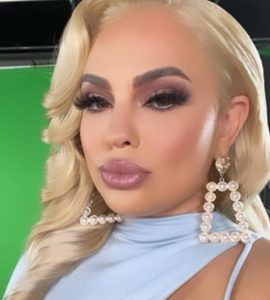 Cartel Crew star Marie Ramirez De Arellano was involved in her family crime business before she and her husband Michael Corleone Blanco decided to quit the drug scene.

Learn about her age, net worth, and her history with Michael in this Marie Ramirez De Arellano wiki. Also, get to know if her romantic entanglements with Michael took any toll on her relationship with family members.

Cartel Crew star Marie Ramirez De Arellano was 34 years of age as of July 2021. She celebrates her birthday on the 15th of February every year. Her zodiac sign is Aquarius.

Maria Ramirez De Arellano was born and raised in the Havana area of Miami, Florida. Marie’s nationality is American and her ethnicity is Cuban-American.

Marie Ramirez De Arellano’s dad and mom are first-generation Cuban America. Marie’s grandparents were Cubans and they emigrated to the US after facing exile. In the US, they established their business in Miami, Florida. In fact, as of this writing, Marie’s granddad holds the record for being the first Cuban immigrant to open the only Natural Sponge Factory on Miami River.

While she was in middle school, Marie helped her parents with their courier business. She did jobs such as filing and data entries at the courier company.

Except for her dad and mom, Marie also has one brother in her life, whose name remains a secret.

As of this writing, Marie was not on good terms with her family members. Her relationship with her parents went off the rail the day they learned about Marie and Michael Blanco’s relationship. In case you don’t watch Cartel Crew, Michael’s the son of drug lord Griselda Blanco and an heir to her drug empire.

Marie was available on Instagram and Twitter as of July 2021. She has a massive social media reach.

Why Was Marie Ramirez De Arellano In Jail?

If you watched Cartel Crew properly, you are probably aware that Michael’s wife and baby mama Marie Ramirez went to jail after the end of Season 1. If you are one of the people who is wondering to date about the reason she went to jail, then continue reading.

What happened was, when Cartel Crew member Stephanie Acevado was released from prison the party sort of went off the rails. That night, Marie had some bad words exchanged with her estranged mother and brother.

Marie spent the first three nights in jail before getting out. However, her family ended up pressing charges against her for the reason of domestic violence. She had to return to court and fight her way out of jail.

Reportedly, Marie Ramirez De Arellano’s net worth was estimated to be around $2 million as of July 2021.

Marie went to Miami Senior High School for education. She took the television industry as her elective in high school. She graduated from Miami Senior in 2005.

A couple of years later, Marie acquired a job as a receptionist in a law firm and later as a legal assistant. Sometime later, she received a flight attendant job. For that job, Marie joined Flight Attendant School at the Famous Pan Am International Flight Academy in Miami. She graduated from there in 2007. Upon graduation, Marie started working in companies like Miami Heat, Marlins, Pittsburgh Penguins, Military, and others.

Two years later, Marie realized flight attendant is not her forte and therefore she left that job to get enrolled in a private college in Miami for her associate’s degree in Paralegal. She graduated from there in 2014.

As a paralegal, Marie worked for a couple of law firms and practiced criminal law and personal inquiry.

Later, Marie also worked as a partner and a personal assistant in her husband Michael’s business, Pure Blanco. She helped Michael get TV interviews and endorsement deals. Pure Blanco offers men’s and women’s clothing including hats, toes, and drinkware.

Additionally, Marie also used the platform of Cartel Crew to launch her own business called Mia Monroe, a cosmetics line.

Marie Ramirez De Arellano met her now-husband, Michael Corleone Blanco, in 2015. It was kind of love at first sight for the couple. The pair even welcomed their first and only baby girl, Faith Michelle Sepulveda, on November 18, 2016.

Questions about their relationship were raised after her boyfriend at the time said, “You can’t turn a hoe into a housewife, homie. Truth be told, it might be a wrap, baby. This might be done, ” in VH1‘s unsetting preview of Season 2 of Cartel Crew.

However, every concern about their relationship shattered after Marie uploaded a picture of herself, her now-husband Michael Blanco, and a Miami radio host in February 2019.

The pair exchanged wedding vows in a small marriage ceremony on July 20, 2021. Both of them posted about their marriage on their respective Instagram handles. 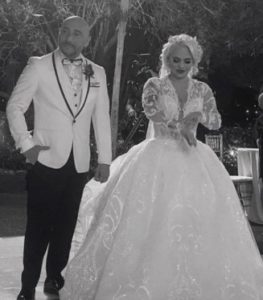 Marie and Michael at their wedding in July 2021.

As of this writing, all she had left was her husband Michael and their kid, Faith as Marie does not have good relations with her own family. She once said, “If Michael decides to leave me one day or if God forbid he goes back to jail, what do I have? Nothing.”