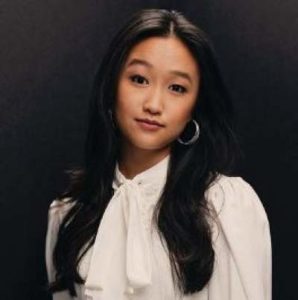 The Sex and the City revival series And Just Like That… continues to gather a listing of phenomenal talents. After Sarita Choudhury, Nicole Ari Parker, and Karen Pittman, more casting of actors Cree Cicchino, Cathy Ang, and Niall Cunningham has been done.

So, before HBO Max’s new series returns with its original sexy rom-com, modern pop culture theme, and 10 episodes, here’s all you need to know about one of its newcomers, Cathy Ang.

Cathy Ang On Sex And The City

The reboot of the original series was officially confirmed at HBO Max. It will only be a limited series that consisting 10 episodes.

Meanwhile, Cathy was confirmed to portray the character of Lily Goldenblatt, the eldest daughter of Charlotte York (Kristin Davis) and her devoted husband Harry (Evan Handler).

Cathy also was photographed on location at the Manhattan School for Music in New York City around late July in 2021, shooting a festive scene with Alexa Swinton, who is playing Cathy’s younger sister Rose (as per Deadline).

Then, when making the news official to her followers on IG, she was so gleeful and emotional, she wrote:

“And just like that… I’m crying YET AGAIN 🥲. Thank you to the @justlikethatmax family for taking me in, and giving Lily such a wonderful voice.”

Then, of course, she also thanked her family for getting her there. Cathy has often openly thanked her parents for their immense support.

Cathy Ang celebrates her birthday every year on August 25th. This makes her a Virgo who reached the age of 25 in 2020.

Cathy Ang Ethnicity, Where Is She From?

Cathy Ang, with the full name Catherine Joyce Ang, was born in Fort Dodge, which is a city in Webster County, in north-central Iowa, in the United States. About her ethnicity, she was born to Filipina-Chinese parents. (She grew up primarily in Cupertino, California.)

Cathy, a Filipino-Chinese-American, has only been to the Philippines five times. But, she is still very proud of her folks’ heritage, culture, and traditions. Then, she has also always loved her Chinese attire (from the time she used to be an “Asian boss baby”).

Cathy has a very special relationship with her parents, Robert and Grace Ang. Her parents met at the University of Santo Tomas in the Philippines and immigrated to the USA to start their medical careers. Both are doctors.

Her dad is from Binondo, Manila and mom from Bagabag, Nueva Vizcaya.

Cathy Ang has two older sisters named Stephanie and Kimberly Ang whom she credits as taking a large part in raising her and as her role models.

Cathy’s sister Stephanie is an NYU alum, an Industrial-Organizational Psychologist, and a talent management associate at the Federal Reserve Bank of New York. You may find her on IG @sangstagrams and Twitter @Stephanie_G_Ang.

Cathy also enjoyed close 78 followers on her Twitter @thecathyang after she joined in Oct. 2020.

Before the world knew of Cathy Ang’s Sex And The City stint, she had above an estimated $800K net worth.

She grew up singing at home but never seriously considered pursuing performance.

Later, Cathy got accepted at NYU Steinhardt’s Vocal Performance program. While in there, she soon fell in love with acting in their Musical Theatre department. Ever since she has been working in theatre and voiceover. And before the career-turning And Just Like That… came her way, she was best known for voicing ‘Fei Fei’ in Netflix’s Over the Moon (2020).

Early morning on Mar. 15, Cathy was literally sobbing when she found out the 2020 musical fantasy animated film, Over the Moon, had become the first China-US coproduced animation work to receive an Oscar nomination for Best Animated Feature.

Cathy Ang does did not shy away from showing the world — she has a boyfriend. So, Cathy had been dating Nikitas Kanellakopoulos from Cupertino, California since at least Feb. in 2017.

Nikitas started grad school at New York University School of Medicine in Oct. 2019. While his LinkedIn introduced him as an MD/Ph.D. Trainee at NYU. 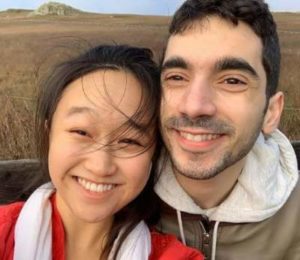 Cathy regularly shared her moments with her boyfriend Nikitas on her Instagram. While Nikitas seemed much less active on his IG @nikitas.kanellakopoulos. So far, the only two pictures on his grid were of Cathy of course, and their dog.