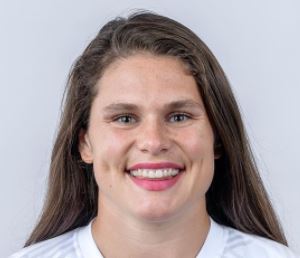 Being an olympian surely has its perks, but there was one athlete who benefitted the most from the 2020 Tokyo Olympics. She is the USA Rugby Sevens star, Ilona Maher.

Ilona Maher wasn’t completely out of the spotlight before she got chosen to compete on the U.S. women’s rugby team at the Tokyo Olympics. However, her fame skyrocketed during the 2020 Olympics as she started filming her “self-deprecating” TikToks described as “funny and unfiltered.”

Her contents included an inside look at the cardboard beds, the gym in which her team exercises, and the dining halls. Also, she was popular for partaking in funny TikTok trends, replying to fans’ queries, and ogling her sexy fellow athletes.

Corresponding to her birthday, Ilona is of the Leo zodiac.

Ilona Maher has not just inherited one, but both of her parents’ talents. Her father, Michael S Maher was a Saint Michael’s College rugby player who taught Ilona “never hold back for anyone.”

According to Ilona, her parents, who have been married for more than 2 decades, were the reason she was in the 2020 Olympics. “They encouraged me to be strong, outspoken, and genuine,” Ilona added. 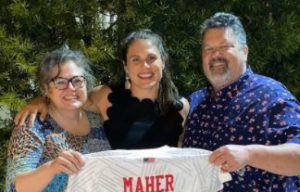 Talking about her siblings, Ilona has two beautiful sisters namely Adrianna and Olivia Maher. Both of them are Castleton University graduates who lived in NYC as of 2021.

Her sister, Olivia worked as a digital creator.

Ilona Maher flaunts a mixed ethnicity. She inherits Dutch roots from her mother who is from Wassenaar, Netherlands; while her father is Canadian.

Mentioning her distinct features, Ilona has a square face, dark eyes, and a dimpled smile.

As per Ilona, she didn’t love her body at all. However, she slowed learned to “appreciate it”. She said, “I’m self-conscious that my personality may be too much for some people.”

An all-around athlete, Ilona mastered field hockey, basketball, and soccer before fully transitioning to rugby during her collegiate career at Quinnipiac University. There, she not only graduated as a registered nurse but also earned All-American Honors and lead the rugby team to three titles in the National Intercollegiate Rugby Association (NIRA).

Also, she was honored with the MA Sorenson Award and in early 2018, her team earned Las Vegas Invitational’s Elite title as well.

Talking about her world championship experience (before the 2020 Olympics), she recently finished 4th in the 2018 championship.

When Ilona wasn’t playing rugby, she loved to go on walks and bullet journaling. Also, she enjoyed trying new coffee shops and restaurants.

Is Ilona Maher A Lesbian?

Though you might have seen Ilona Maher celebrating pride month, she isn’t a lesbian. According to her TikTok account, Ilona uses she/her pronoun to address herself.

Also, if you follow her over TikTok, seeing her ogling her sexy fellow athletes must clear things up.

Ilona Maher was single for over 25 years before she joined the Olympics in 2021.

In a podcast co-hosted by Naya Trapper, Ilona shared that she never met anyone who could sway her heart. But although she never had a boyfriend before, she confessed to having “buddies with benefits”.

And yes, Ilona has tried every means in search of a boyfriend. Dating apps, blind dates, you name it.

Recalling one of her dating experiences, Ilona shared that it went “terrible”. She spared us with the details.

Also, Ilona revealed that it wasn’t until she became a college student, she started dating. The reason being — she didn’t consider herself “hot enough”.