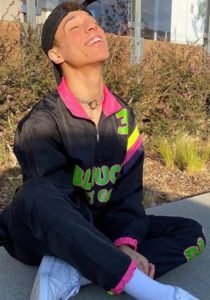 YouTuber/TikToker Larray gained prominence for his funny videos, which he uploaded on his social media accounts. His burgeoning popularity got him signed to TikTok’s greatest collective The Hype House.

More on that, he also landed a few brand deals which added to his net worth. This wiki-article explores Larray’s private life, relationships, and career stories so scroll down to learn more.

Larray was born on 22 July 1998 at Kaiser Hospital in his hometown of California.

In July of 2020, he celebrated turning 20 years old. The celebrations, however, drew backlash for violating the social distancing rules placed after the COVID-19 pandemic. Reacting to the criticism, Larray apologized and promised to do better.

Circa August 2020, Larray again found himself in the hot water after the resurfacing of offensive rape tweets from 2011. He would issue an apology stating he was 13 and didn’t know better.

Larray was born to parents who he has shared very little about. But, he often tweets about his anonymous mother who hasn’t appeared on any of his social media platforms.

As for siblings, he has a little sister named Tiffany.

The social media star’s real name is Larri Merritt. He is half-black in his heritage. His adorable grandma is often featured on his YouTube and TikTok account.

Besides that, no other information on the YouTuber’s family has been made public.

Larray started his career as a social media entertainer by jumping in the wave of making vines. He was popular for making funny videos. However, after the application shutdown, he moved onto pursue his passion on YouTube.

The comedian first created his YouTube channel on 19 August 2011 named it LARRAY.

He started gaining prominence online for his acting prowess and being an openly gay individual, the universe of social media welcomed and enjoyed his contents. Though he couldn’t abstain from the homophobic rant, Larray overlooked it and established himself as a successful social media star.

The YouTuber gained relative success in TikTok account for his lip-sync and funny videos. He was admitted as a member of the TikTok collective The Hype House on January 30 2020 and became one of the newest members.

In both platforms, he also makes videos related to the game Roblox.

Following the success, Larray branched out and explored his career in music. His song The Race (Remix), video for which was uploaded on 12 February 2018 went on to garner 37.4 million views on YouTube as of April 2020.

Several brands noticed the impact he had on people. So they offered him to endorse them. Soon after, Larray chose to connect with Bling H2O and earned the endorsement.

Besides brand endorsements, he owns a line of merch labeled GIRLIES.

With multiple sources of income on his name, Larray is on his way closing the gap between his current net worth and his first $1 million.

With his cross-section popularity in multiple social media platforms, his prominence grew in several rapidly.

His YouTube account collected 4.47 million subscribers as of April 2020. Likewise, his TikTok account had earned him attractive followers of 8.2 million with 206.8 million likes in total in all of his videos.

Also, Larray’s Twitter account garnered 548.2k followers and his the least active platform Instagram only had 4832 followers as of the time when this article was penned.

As for distinct features, despite proudly boasting a half African-American heritage, Larray owned a light skin tone.

Most of his earliest tweets were about his relationships. He hinted on several dating experiences through his tweets but never bothered going into details.

Furthermore, in May of 2017, Larray uploaded a YouTube video titled MEET MY BOYFRIEND. But videos turned out to be a click-bait and it was one of his close friends Clay.

Fans also assumed that he was dating his best friend Issa but both addressed the relationship and denied the rumor of them being an item.

In 2018, he started dating Jacob Villegas. But the relationship ended after the couple dated each other for a brief period. But even after they break up, they remained friends. 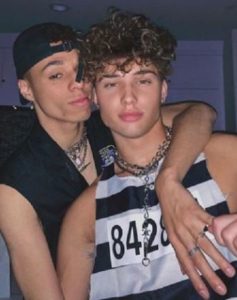 Larray and his boyfriend Brady together (Pic: Married Biography)

In February of 2019, Larray set on a romantic journey with a fellow social media star Brady Potter. Together, they made videos on YouTube and TikTok. As of 2020, there was no clue if they were still a couple or had they already broken up.