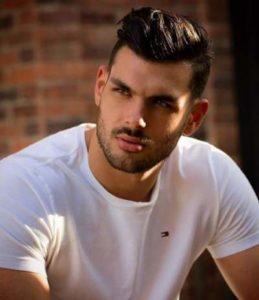 Selling Sunset viewers saw Romain Bonnet since the show premiered for the first time with eight episodes in March 2019. He continued to show up by his realtor partner Mary Fitzgerald’s side for its third season as well; the reality show renewed for the third time in early-August 2020).

The Netflix series encircles the lives of a group of realtor agents of The Oppenheim Group in Los Angeles, mostly fighting over selling real estate.

In the writing below, amid the release of the show’s newest episodes, let’s divulge into personal life, wiki and career details of one of the regular appearance, Romain Bonnet, the French hunk.

So far, the fans saw Romain become the center of more than a few controversies and squabbles. But they still did not know much of him, outside of the show.

Well, you come to the right place!

Romain Bonnet, who grew up celebrating his birthday every year on 18th June, is a Gemini.

Romain Bonnet’s accent is not fake. He is actually French and therefore inherits French ethnicity from his folks.

His parents, they still do not speak English. Because of the fact, his bride had delivered her vows in French; the gesture meant a lot to his parents.

Romain’s mother is Francoise Bonnet. While there were no details about his siblings (if he has any).

Romain Bonnet stands tall in 6 feet and 3 inches height. With size 12 feet and an inside leg of 34 inches, he wore suit sized 42L and shoe sized 12.

Naturally, he has black hair and eyes of hazel color.

Romain Bonnet had 203K followers on Instagram (until 24th august 2020). He has been rated with 5-stars in another platform called Cameo where fans can get personalized messages from their favorite celebrities.

Meanwhile, on Linkedin, he describes himself as a model, working in the Greater Los Angeles area.

Reportedly, Romain Bonnet happened to be a pastry chef when Mary first met him. Although, per Mary last spoke, he had not been doing his culinary work “for a few years now”.

She mentioned that they have both stayed home working during the shutdowns in Los Angeles.

“He models as much as he can, but because of the pandemic, most of his gigs have been put on hold until further notice.”

Outside of assisting Mary’s projects on Selling Sunset, Romain is a Wilhelmina Model.

His career brought him to L.A. after his modeling agency encouraged him to relocate because of all the bookings in the L.A. area.

And, in the meantime, Romain Bonnet accumulated around $350 thousand net worth, from his diversified jobs.

Romain and Mary entered “civil union” a year before shooting the first season of Selling Sunset. But they decided not to tell any of their friends or family, as they were still not sure if the relationship would work out in the long term.

Finally a year later, on the 12th of October 2019, they officially got married at a French-themed wedding in Los Angeles.

The intimate ceremony, with their families as the main focus, was documented in the second season of the Selling Sunset. 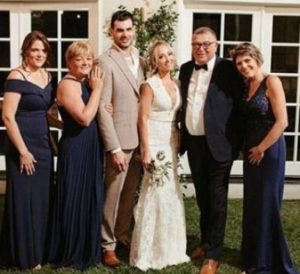 Romain, with his bride, his family, and in-laws, on the wedding day (PIC: Romain’s IG)

Mixing pleasure with business, the wedding took place inside a French-style mansion that was Mary’s very own listing. The bride managed to sell the property before even walking down the aisle.

“Neither of us are big, showy kind of people, and we just wanted the people closest to us, where it just felt sincere and comfortable. So that’s what we did.”

The couple met in 2017 through mutual friends and began dating shortly after until Romain popped the question in 2018. “I didn’t want to waste time, and I just wanted to move forward with her and lock it down”— Romain had shared his thoughts on the matter.

Mary, who happens to be 12-years Romain’s senior, was married twice before. Her first husband passed away and with her second husband, she said, things “just didn’t work out.”

While it may be too soon for Romain and Mary to have a baby, Mary has a son, Austin Abbatt, from her previous relationship. She gave birth to her only child when she was just sixteen.

Davina Potratz is one of the six female real estate agents working for The Oppenheim Group, merchandising...