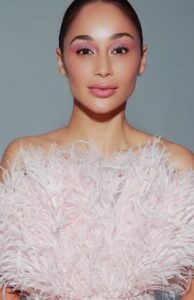 Likewise, Cara is an entrepreneur/Co-founder of TheGlamApp. In between her occupied schedule, she finds time to impart her service getting involved in philanthropic activities.

This wiki-type article brings you the details on the professional and personal life of Cara Santana.

Cara Santana was born on 2 April 1984 in El Paso, Texas, United States. She was born to an Italian Catholic father and Nancy Santana, her Russian Jewish mother.

She has one sibling, her younger brother Sammy Santana.

As noted by so many, Cara left El Paso for California when she was only fifteen and hasn’t looked back since.

Cara’s father was in the military (US Navy). On 12 November 2018, she wished her father a Happy Veteran’s Day and showed her gratitude for the service he had done for the country.

Moreover, Cara is very close to her parents. She hardly ever misses the opportunity to remember her family on an important occasion.

Coming to her education, Cara attended Idyllwild Arts Academy where she graduated with a degree in performing arts.

Cara’s love for acting and fashion blossomed when she was young. She set off her career as an actress with TV series Strong Medicine (2005).

Following that, she appeared on multiple TV movies and TV shows. In 2007, she starred in Descendents of Eden (2007), Lipshitz Saves the World (2007) in which her performance was well received.

Besides her ongoing career as an actress, Cara also got occupied with her career as an entrepreneur. She and her colleague founded TheGlamApp in 2015, an app to hire stylists and beauty experts.

Cara’s charitable endeavors attracted her a large no. of followers on her social media page.

She never hesitated to dedicate part of her time to serve in the program of organizations like UNICEF and The Art of Elysium. She is a role model in every sense of the phrase.

Cara Santana is estimated to have a burgeoning net worth of $1 million.

More From Us: Tiffany Boone, Husband, Dating, Net Worth, Family

After dating for almost 9 years and engaged for 3, Cara Santana’s long term relationship with Jesse Metcalfe — her husband prospect — ended, in January of 2020. 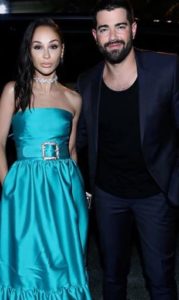 Cara and Jesse attending The Art of Elysium in The Hollywood Palladium on 6 January 2020 (Pic: Cara’s Instagram)

The pair were on and off several times during the period of their relationship. Cara and Jesse were rumored to be having problems since early December of 2019. And it got even worse in January, as they lacked the necessary communication to work things out.

It appeared, Cara wanted to get married as they’ve been in a relationship for a mighty long time but Jesse was not committed enough to see her in the wedding dress walking down the aisle.

On Wednesday, 22 January 2020, Jesse was spotted packing on the PDA with two females on the same day but at different times. Daily Mail published photos of Jesse’s former husband prospect getting cozy with model Livia Pillmann and actress Jade Albany Pietrantonio.

Cara was heartbroken and disturbed by the news. An insider said she understood they had fair shares of ups and downs but she never expected to be betrayed.

By August 2020, Cara Santana admittedly had healed from her heartbreak and started dating Shannon Leto.

Romance rumors swirled after Daily Mail shared photos of Cara and Shannon making out during their outing in a beach near Santa Monica, California.

Cara’s boyfriend Shannon is best known as the brother of Hollywood star Jared Leto. Together, the Leto brothers made up 2/5th of the band “30 Seconds To Mars.”

As for Cara’s ex, Jesse Metcalfe also found love with Corin Jamie Lee Clark. What’s more, Jesse and Corin were even isolating together amid the COVID-19 pandemic.

Those acquainted with the Sofia Coppola-directed film The Bling Ring know Carlos Miranda, who portrayed the...