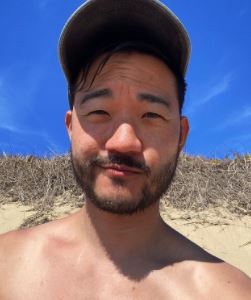 Quibi’s new show, The Expecting is out, and playing the role of Cody is our star for the article, Daniel K. Isaac. The horror series revolved around a woman who gets pregnant in a mysterious way and with the presence of Daniel, we are sure more thrills are coming our way.

For those wondering where you’ve seen Daniel before, he also played Ben Kim on the show, Billions.

Here is everything you need to know about Daniel K. Isaac.

Corresponding to his birthday, Daniel is of the Sagittarius zodiac.

Did u know: “Isaac” means “laughter” in Hebrew. That’s why Daniel mentioned himself as a “loud laugher”.

You may like – Larray Wiki, Gay, Boyfriend, Net Worth, Height, Family

Daniel K. Isaac was born and raised in Southern California.

Coming from a single-parent family, Daniel was raised by his mother, Esther Lee. She is a devout Christian and comes from a Korean heritage.

Daniel considered her to be his dad as well. He even took it to Twitter to wish her and all the single moms a “happy fathers day” in 2014.

Also, in 2019, Daniel did the same but this time he wished himself as well. He wrote,

“In recent years i’ve been called ‘daddy’ more and more so… happy daddy’s day… but really, happy father’s day to all the single moms out there… also, happy pride month…”

Furthermore, Daniel wrote about his mother over his site at “accordingtomymother.com”. Do check it out if you want to learn more about her. Also, there was an Instagram devoted to her @accordingtomymother and Facebook @AccordingtomyMother with over 3K and 1.5K followers respectively.

Talking about his siblings, Daniel had no biological brother or sister reported. However, in 2018, Shannon Tyo insisted that Daniel could be his brother and they were waiting for DNA results to come back.

Trivia: Daniel wished for the actress Malin Akerman to be his big sister.

Likewise, find her on Facebook @danielkisaac with 1K followers.

While Daniel was in fifth grade, his mother heard a story about a preacher who went numb with stage fright and had to be escorted off the stage. Since Daniel wanted a career in acting, she immediately signed him up for Grace Korean Church’s theatre troupe and he’s been acting ever since.

Later, Daniel received his Bachelor’s in Theatre from UC San Diego and moved to New York City where he worked on small and large screens and stages. Also, most of his earnings could be accounted to his acting career. Here are some of the popular movies and TV shows credited to his name.

Is Daniel K. Isaac Gay? His Coming Out Story

“I just remember looking at pornography and then um going towards the gay sections and thinking, oh this is where I would rather be.”

But Daniel feared rejection by his friends and wanted to change himself. He first came out to his mother to ask for help to “stop being gay”. Then he went on to tell the people at church and they put him through conversion therapy for three years.

And this was all before 16. Soon, Daniel was tired of fighting his sexuality and he confessed to his mom again.

As a result, his mother disowned him.

But along with time, they have come to acknowledge it, and now that Daniel’s made a career out of it, she isn’t upset as she used to be.

In 2020, Daniel K. Isaac was living with his boyfriend, Chad Reed in New York.

Reportedly, the duo started dating in 2019.

Just in case you are curious, Chad isn’t Daniel’s husband.

Daniel and Chad came close with their love for theatre. They were seen for the play, Sleep No More at the McKittrick Hotel for Chad’s birthday 2020. Also, they attended To Kill a Mockingbird, A Strange Loop, Moulin Rouge, and other plays together.

Little info about Chad: he is the co-founder of Blue Forest Conservation and investor in climate change solutions.

Before you leave – Is Monica Raymund Gay? Boyfriend, Husband, Net Worth

Meet Chad Reed, popular as the boyfriend to the Billions star, Daniel K. Isaac. In 2020, with the release of...