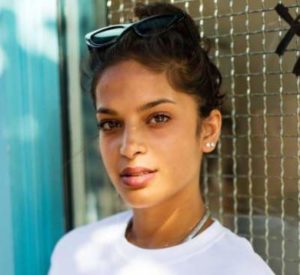 One mostly recognizes Ella (Priya) D’Souza as a TV producer who landed fame as the assistant and producer for David Dobrik. David, as you know, is a popular Slovak-born YouTuber. He is known for his vlogs and antics with a group of creators called the Vlog Squad.

Below is a wiki-writing about Ella who found herself amid an up-and-rising career as she started working for David in May 2020.

Born with the personality traits of a Pisces woman, Ella D’Souza turned 23 years of age on February 28, 2020.

It seemed Ella’s father Michael D’Souza is one who is originally from India and her mother Penny is from Britain. Ella grew up seeing her mom as her teacher, adviser, and greatest inspiration. Ella, the only child in the family also shares an equally loving bond with her father.

Standing fabulous to a height of over 5′ 6″, Ella D’Souza lately reported a weight of more than 121 lbs.

Sporting all kinds of ensembles for her NYTHELOOK on Instagram, she is definitely your role model to educate you on what to wear on every occasion you have in mind.

Just so you know, her natural hair color is black and her eyes are of beautiful kinds with a similar shade.

And while most of her personal handles ‘Ella D’souza’ remained publicly private, she wanted to drag more attention to her another account dubbed NY THE LOOK.

World traveler and fashion obsessing Ella founded this perfect partnership with her best friend Greta and named it NYTHELOOK. So, Ella and Greta’s “internet brainchild” is all about a guide to ultimate fashion, food, and everything in-between, especially to their followers living in NYC.

Sometime in 2013, Ella moved to New York City from Rome for college. So, she went to Fordham University in the Bronx. And graduated from there in 2017, with a B.A. in Communication and Media Studies.

Following graduation, she has been working in the digital content space.

First, she worked with the Creator Marketing team at Samsung. Next, she held titles such as experiential producer and then was promoted to head of production at Casey Neistat’s start-up company, 368. Eventually, came in the freelancing of a Project Manager for Mass Appeal. And before she knew she was part of her dream project.

And lately (in 2021), Ella continued serving in the position of executive producer at David Dobrick LLC in Los Angeles County, California.

Ella, who studied at Marymount International School Rome and Collegio San Giuseppe De Merode previously, landed her big break with David Dovrick through her former boss Casey. Casey’s brand was hosting a pop-up for David’s merchandise. This is where Ella met David and discussed working with him for the first time.

In a podcast episode of Hoot & a Half with Matt King and Mike Sheffer, Ella shared the story. David had told Ella she should move to L.A. But she did not want to at the time because she was enjoying her life in the Big Apple. And most importantly, she was not looking to be his personal assistant. However, she did not want to lose contact with him altogether. And this way, just when another job came up, as she had wished, she flew to her L.A. job right away.

Now, a member of Vlog Squad, Ella is very passionate about her job. She has made it clear time and again that she just does not like being referred to as “one of David’s other assistants.”

“I refuse to be called an assistant. I’m an employee of David Dobrik LLC. I moved here eight months ago to work for David and, you know, I had known David for, like, a year prior to moving here”.

Shortly after David Dovrick officially added Ella and the likes of Taylor Hudson to his group, Ella did not just found herself a dream job but also landed unanticipated fame.

Busy soaking up all the newfound privileges, she was yet to discuss her dating lives and boyfriends with her getting-bigger fans.

Until that is happening let her enjoy her very first Mercedes-Benz, gifted by her super famous boss who was named the People magazine’s Sexiest Heartthrob in 2019.

On November 22, 2019, David took to Instagram to announce he officially signed divorce papers with Lorraine Nash. They had gotten married only in May 2019.