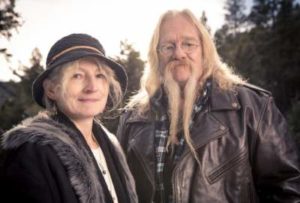 After being part of the docudrama-style reality television series since May 2014, Billy breathed his last air sometime on February 7 leaving everyone in the family heartbroken, especially his wife Ami Brown.

The September 21, 2017 episode in season 7 of Alaskan Bush People saw Ami Brown ready to undergo treatment for lung cancer. In Dec. 2017 she was in remission, and sometime in 2018, after chemotherapy, she was cancer-free (the Us Weekly reported in 2021).

Ami’s worsening health condition i.e. the diagnosis of advanced lung cancer was known to the world in June 2017. Back then, she was given survival rates as low as 3 percent. In June, the same year, she had explained having some pain in her back. “Walking from the house to the garden, I would get winded. There were days I was just bedridden, but I just thought it was my arthritis”, she had told PEOPLE.

The family had relocated from rural Alaska to the North Cascade Mountains in Washington for Ami’s treatments.

In August 2020, the Brown family celebrated their matriarch’s 57th birthday. On the occasion, Bear Brown composed a touching Instagram caption to his “strongest and most courageous” to his mother.

“I feel very blessed to still have my mother with me and that she has gotten to see the Wolfpack grow even larger with grandchildren. Through all the adversity we’ve faced we still stand together as a family! Even stronger because of it!!! Happy birthday Mom!!!”

From her hometown of Texas, she met Billy when she was 15. She got married right away to a then 26-year-old Billy. Technically, the marriage was legal. However, Ami’s mother wanted her teenage daughter to stay in school and finish her education before she got married. So, Ami had to cut ties with her family.

Her mother and brother had accused Billy of forcing her to drop school and being a very controlling husband. Her brother even claimed that when he confronted Billy about Ami’s education, Billy had angrily said

“That’s none of your mother’s business now. She belongs to me!”

Meanwhile, Bily had no one in the family to object to his decision. Sometime before, he had tragically lost his parents and sister in a plane crash when he was only 16.

Standing a bit less than 5′ 6″ and above 55 kg, beautiful Ami Brown has definitely aged gracefully.

Although Ami Brown was not personally on socials, she could be seen now and then on the official ‘Alaskan Bush People’ account probably managed by her kids. The profile dedicated to the whole Brown family had 42.7K followers on Instagram, 48.7K on Twitter, and 631K on Facebook.

Having reportedly managed under $800 thousand net worth until early-2021, most of her life Amy Brown has been a homemaker.

As written in her Discovery bio, Amy has forever taken great pride in her garden, where she grew vegetables, herbs, and flowers. In the Alaskan bush, she was even considered an authority on what to grow, when, and how. Besides, she homeschooled her children and became their teacher.

The viewers are well aware of the times when she exchanged gardening and cooking tools for charts and maps as the family’s undisputed navigator. Although maybe not in college or universities, the art and history of navigation is a subject she studied extensively in the past decades.

Alaskan Bush People aired its last episode from the twelfth season on October 18, 2020, and Ami was clearly a fan-favorite on the show, reading books about celestial navigation whenever she wanted to relax.

Just so you know, Ami has a criminal history of welfare fraud. And late-Billy, who was forking over $1.6 million (in 2018) for over 400 acres in Washington, found trouble with the laws for horse theft in 1980.

Matt the eldest of all was born in September 1982, and the youngest, daughter Rainy was born in Nov. 1994.

The series showed the Brown family as they build lives together off the grid in Alaska before moving to Washington State in the last season.