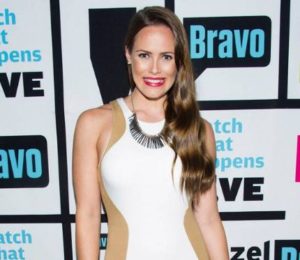 On 10th April 2021, Kara Keough announced the birth of her 3rd child. She and her husband, Kyle named their newborn, Vaughn Mack Bosworth.

Kara and Kyle named their 3rd bundle of joy Vaughn as a tribute to their late son, Mack.

In early April 2021, Kara Keough shared she and her husband, Kyle Bosworth were expecting their 3rd child.

Breaking the baby news via Instagram, Kara wrote: “This Easter is decidedly better. Despite that wretched Easter night, I can’t ignore that this day also represents rebirth. Renewed hope. It is said that the word “Easter” is derived from the goddess Eostre. Eostre, the goddess of fertility, symbolizes the birth of new life and the dawn of spring. And so it is for us. New life, the dawn of something beautiful and restorative. Quite literally rising from the ground.”

Also, in the very Instagram post, Kara reflected on the death of their 2nd child, McCoy Casey.

On 3rd May 2020, Kara Keough broke the devastating news that her father Matt Keough passed away.

At the time, she didn’t reveal his cause of death.

Via IG, Kara shared a collage of throwback pictures of Matt. In the accompanying caption, she wrote: “Daddy, please take care of my son. Teach him the circle changeup and how to find forever friends. You’re on grandpa duty in heaven now. Xoxo, Hammerhead.”

On 14th April 2020, Kara Keough shared that she and her husband Kyle Bosworth were mourning the loss of their newborn McCoy Casey. Via an IG post, she revealed that her son passed away after experience “shoulder dystocia and a compressed umbilical cord” during his birth.

Per the post, baby McCoy arrived on 6th April 2020 at 3:10 a.m., measuring 21 inches and weighing 11 pounds and 4 ounces. According to Kara, McCoy surprised them with his strength and size. She then added: “He joined our Heavenly Father and will live forever in the hearts of his loving parents, his adoring sister, and those that received his life-saving gifts.”

Further down on the Instagram caption, Kara divulged that she and Ky;e opted to donate their son’s organs. Admittedly, she wished others to find hope and profound healing through the donation.

Kara ended her message by quoting the Bible. “Until we see you again… We love you, McCoy,” she concluded.

Via a blog post “How Do I Say This?” uploaded in late October 2019, Kara Keough opened up about being pregnant with her second child with her husband Kyle Bosworth.

Referencing their European trip, Kara eloquently delivered the baby news by writing: “Our little Eurotrip left our hearts, our bellies, AND my uterus quite full…”

The reality star also shared a photo of her husband Kyle and their daughter Decker holding a onesie that had “Bebe Tigre” printed across the front.

Admittedly, Kara and Kyle’s second bundle of joy would arrive on 2nd April 2020.

Pregnant Kara initially had second thoughts about sharing her baby as the announcement collided with Pregnancy and Infant Awareness Month.

The news of Kara Keough being pregnant for the second time arrived three years after she gave birth to her first baby. She and her NFL star husband Kyle Bosworth named their firstborn Decker Kate Bosworth. 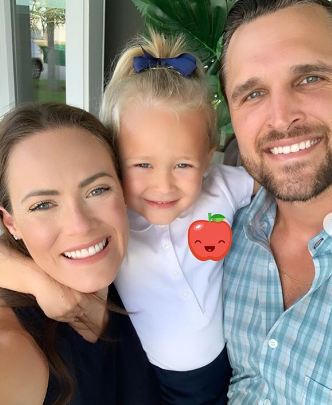 Back in 2014, Kara and then-fiance Kyle got married in a gorgeous wedding ceremony. On the big day, she wore a Mark Zunino-designed and pink-colored gown.

Two years before tying the knot, Kara and then-boyfriend Kyle had gotten engaged.

Born in 1988, Kara Keough turned 32 years of age on 31st October 2020. Fellow Scorpion Willow Smith celebrates their birthday on the same day as her.

Coming from a family of five, Kara is siblings with brothers Colton and Shane. The Keough brothers are minor league baseball players.

After finishing high school education, Kara enrolled at the Univerisity of California in Berkeley. Following a two-year stay, she then transferred to UCLA.

In 2012, Kara joined the “Adecco Group” as the company’s Marketing Specialist. Quitting the gig, she then went on to work for “Naterra International.”

Kara returned to “Adecco Group” in Summer 2015. The second stint saw her take up the job title of Content Marketing Manager.

As a child, Kara dabbled in acting. She starred in three movies “Outbreak,” “Implicated” and “Miracle in Lane.” Meanwhile, “Chicken Soup for the Soul” is her notable TV apperance.

Per Celebritynetworth.com, Kara Keough owns $750 thousand net worth. Meanwhile, she measures a little above five feet & six inches in height.