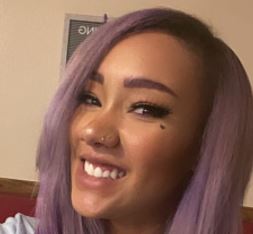 Many promising faces entered Hell’s Kitchen season 19 that kicked off on January 7, 2021. And among them was the purple-haired girl Mary Lou Davis who stood out from the rest, literally! She was even called out by Gordon Ramsay for winking at one of the guest chefs.

So, who is this audacious talented chef, competing to win the Head Chef position at Hell’s Kitchen? Learn all about her as this Mary Lou Davis wiki unravels.

Mary Lou Davis was 28 years of age as she entered the Hell’s Kitchen in 2021.

The Chippendales sent their best wishes to Mary and asked her to come back to celebrate with them once she wins the competition. Previously, she celebrated her 21st birthday there.

Mary Lou Davis appears to be Blasian (a mixture of Black and Asian). Her ethnicity is shared by her Black mother, Mary Davis, and probably a dad with Asian heritage, whose name wasn’t revealed. 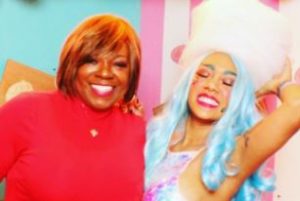 On her 13th birthday, Mary shared a family of her picture over IG, alongside her mom and dad. Though the parents appeared to be Black without a doubt, some fans in the comments section were skeptical about her ethnicity. A fan wrote,

To which, Mary replied,

“What are you talking about?”

As for her hometown, Mary hails from Logansport, Indiana. But as of 2021, she resided in San Antonio, Texas.

Did you know: Mary Lou (full name Mary Lou Davis) is named after her mother  Mary Davis; and for that, she feels blessed. According to Mary, her mother was the “most amazing and inspiring woman” she knew. Moreover, “a role model, hero, and best friend”.

Mary Lou Davis stood out in Hell’s Kitchen with her purple hair. But only fans knew how much her hair color changed — blue, red, blonde, purple, and many more, she owned every color of wigs.

If you noticed, Mary also lost some weight during her time in Hell’s Kitchen. She shared that she lost “like 10 lbs” due to “stress” over the show.

Talking more about her body features, Mary is a tattoo enthusiast. She has two tattoos on her left thighs and a few on her under breasts.

Also, Mary had a Youtube channel with 3K subscribers named “Geeks&Grubs” and was present on Twitch over the same name with 262 followers. If you are curious what does  “Geeks&Grubs” mean, it’s her and “a band of scallywags” banded together, featuring Mary’s cooking.

Talking about her career, Mary is a professional chef who never dreamed of being a chef. She shared, “I wanted to be a vampire or an assassin. Seriously, something powerful and strong.” But she always “ liked to eat” and that was the reason she fell in love with cooking! She then started washing dishes at a horse racing track, got a full scholarship to the University of North Texas, and later got accepted at Culinary Institute of America, San Antonio where she honed her cooking skills.

It wasn’t an easy ride for Mary to become a professional chef. She shared that she had “3 jobs at one point just to get by.” She has worked as a chef’s assistant at Verde Catering from 2009 to 2012, a server at Almo Quarry and Pappadeaux. As of 2021, she was working as a full-time Chef Partner at Whiskey Cake Kitchen and Bar in San Antonio.

Over Hell’s Kitchen, Mary was the fan favorite. Her humor and audacity were loved by many. Many predicted that she just might be the one to win the Head Chef position and a salary of $250 thousand per annum. Despite giving her all, Mary lost the season to fellow chef Kori Sutton. Fans, who supported her, didn’t seem happy with the outcome.

When she is not working in the kitchen, Mary loves to cosplay. She has cosplayed many comic characters including Batman’s Joker.

Mary Lou Davis’s relationship status wasn’t shared as of 2021. So, it was a dilemma if she had a boyfriend, or was already married. But judging by her posts, it doesn’t seem like Mary had a husband. Perhaps, a boyfriend maybe.

During her stint at Hell’s Kitchen, Mary enjoyed a connection with fellow contestant, Cody Candelario. The rumored romance between all began after they began flirting while in the hot tub. However, Mary later confirmed she and Cody weren’t dating. What’s more, Cody seemed to be in a relationship with KT Koenig.

A little info about Cody— He hails from Sherman Oaks, California. The executive sous chef suffered an illness that caused his sense of smell and taste to go away.