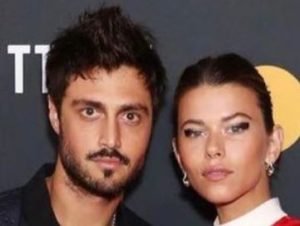 In April 2021, Georgia took it to her IG to reveal the news that she was soon expecting a child with Nathan. Though she kept “quiet” about her pregnancy for a while, given the baby bump, she couldn’t hide it anymore. Thus, it was time for revelation.

And along with the surprise, also came people’s inquisitiveness about her baby daddy. So, here we are sharing this wiki on Nathan.

As per his birthday, Nathan is of the Virgo zodiac.

On Nathan’s  26th birthday, Georgia took it to her IG to share a few words of love. She wrote,

“(three green heart emojis) The only thing certain about this year is you. HBD. I love you to the (moon emoji).”

Nathan Dalah didn’t share anything about his family. But though he remained quiet about his side, Nathan was open about being a part of Georgia’s family. On celebrations or occasions, Nathan was often spotted over pictures with them.

Mentioning his distinct features, Nathan could be a male Victoria’s model himself if there ever was one. A ripped body, tall stature, and an attractive face, Nathan has it all.

As of April 2021, Nathan had 1.2K followers over Instagram @nathan_dalah, which was kept private then.

Though his private Facebook account wasn’t shared, you can find him at his company accounts @fishbowlsashimi with 17.5K followers and @pacificbondibeach with 384 followers

So, what was his game? Well, he was the Founder and CEO of “FISHBOWL”, a restaurant that served Japanese-inspired salads and warm bowls in Sydney and Melbourne. It was also one of Australia’s fastest-growing quick-service restaurants. Reportedly, Nathan founded the company alongside two others, Nic Pestalozzi and Casper Ettelson in July 2016.

Trivia: Bistro de CBD and Three Blue Ducks alum Joel Bennett was the head chef of FISHBOWL, designing a menu that takes cues from the Mediterranean and Middle Eastern cuisines.

Before opening FISHBOWL, Nathan “bounced around a few degrees” at University. He was studying law, journalism, and commerce, and couldn’t make up his mind about which direction to set the sail. Finally, after nine months of brainstorming with his classmates Nic and Casper, Nathan found his calling for food and a healthy lifestyle. Thus, they opened a restaurant that now has over 15 stores in Sydney.

For education, Nathan attended The Scots College from 2001 to 2010.

Nathan Dalah and Georgia Fowler cherished a private dating life. Though information about how they first met wasn’t shared, Nathan first appeared over Georgia’s IG in May 2020.

Like Georgia, Nathan revealed the good news about soon welcoming their baby over his IG as well. He wrote,

“Beyond excited to welcome a little princess into the world with my superwoman.”

So, it seems that they would be welcoming a daughter.

Just a month before the pregnancy revelation, Georgia had shared her fears about having a daughter because of the pressure social media puts on young women. She wrote that she was “scared of having daughters,” and added,

“It does worry me on the flip side if there are very young girls posting images of themselves, that may be a bit too provocative for their age.”

Furthermore, she justified that there were some aspects of her life she won’t share on social media.

Logically, their daughter would be the second child they would be taking care of. Nathan and Georgia previously adopted an adorable puppy (a pooch) named Chilli. The pup was often featured over Georgia’s IG.

Just in case you are here as a fan of Nathan and don’t know who Georgia Fowler is: She is Victoria’s Secret model who has walked the runway for Chanel and has been featured in publications like Harper’s Bazaar Australia and Vogue Girl Korea. Born in Auckland, New Zealand, Georgia has been modeling since the age of 12 and flaunted 1.2M followers over IG (as of 2021).