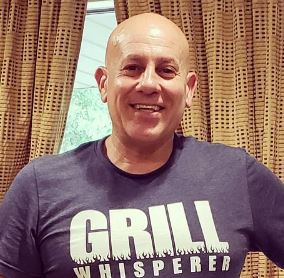 TV star Wendy Williams hinted at a new relationship with one Mike Esterman in March 2021. She was spotted with Mike in New York, plus the Instagram snap where she and Mike were captured drew attention towards the new man she has in her life.

So who is Mike Esterman? And what does he do for a living? Scroll down this Mike Esterman Wiki to learn more about Wendy Williams’s new alleged boyfriend.

Mike Esterman was born to Bernard Esterman and his anonymous wife in his hometown of Rockville, Maryland, the United States. Like every other parent, Bernard also played a very important role in raising kids. The way it could be deduced from his social media posts of Mike, Bernard was dearly loved by his kids.

Sadly, Mike lost his father on 2 July 1997 and commemorates him every year on father’s day, Bernard’s birthday, and fourth of July.

More about his family: Mike grew up with his sister named Leslie Esterman. She appears to be very close to Mike and shows her support for him on his social media accounts.

While Mike has been widely known in the community of celebrities from different fields, it comes as a surprise to know that he isn’t as popular as he should be. His Instagram account only earned 4674 followers as of March 2021.

Whereas, his verified Twitter account garnered 6835 followers in total. On the platform, he tweeted and retweeted over 12.7k times. Moreover, he is also on Facebook but hasn’t posted much compared to his other social media platforms.

Hair or no hair, Mike Esterman is still a dashing man who can capture the hearts of many. He is always dressed well and looks camera-ready most of the time. One of his distinct features is his goatee and a bald head that makes him stand out among the crowd.

But it wasn’t always like that for Mike’s bald head. Occasionally, he posts throwbacks which shows him with a head full of hair and takes his fan by surprise. Talking about his height, Mike Esterman stands tall at 5 feet 8 inches (1.72 meters) and weighed about 91 kilograms (200 lbs).

Mike Esterman always had an entrepreneurial spirit inside him. While in sophomore years of high school he started a limousine business titled Arrive in Style working full time. He started the business with the help of his father as he loaned him his 1934 Rolls Royce.

Mike shared a snap dated 1984 in November 2020 which showed him in the office. He again posted another snap with the Rolls Royce on 21 February.

Apart from the business, he was also a regular dancer on Dick Clark’s American Bandstand Theatre. The entertainment industry always attracted him closer so he decided to build a career out of it.

With his associations and networking that he developed working closely with several celebrities in music, movies, and other fields, Mike decided to start a celebrity booking business. Based on his LinkedIn profile, he founded the business in 1999 and devoted his time and attention to develop the business.

He founded the website Esterman.com which helped the online booking process through the internet. Brian David Suder, founder of The Suder Company named him the #1 Ranked Celebrity Manager in the world which is one of the great compliments that he received in his career.

In the course of running a thriving business, Mike got acquainted with several artists such as Mario Lopez, Alex Trebek, Kim Kardashian, Jimmy Fallon, Megan Trainor, Dwayne Johnson, Ed Sheeran, and numerous others.

Meanwhile, Mike Esterman accumulated a total net worth of $3 million from his job as a celebrity manager. However, he was also introduced to people as one who works in real estate and home improvement.

TV personality Wendy Williams ignited conversations after she posted a photo on Instagram where she was getting cozy with Mike Esterman. On the post, she noted that Mike was a real gentleman and that the two had fun together.

They were also spotted leaving the CORE CLUB based in New York. But fans of Wendy knew him as the winner of the game Date Wendy in February 2021. He competed against two other finalists.

They casually talked about the ideal date and favorite foods before Wendy dropped “Why are you the one for me?” To which he replied,

“It seems like we have a lot in common. I’m a guy that loves to have fun and you seem like the same type of fun person that I would love to get to know, and if you’re feeling the fever I’ve got a prescription.”

By May 2021, Mike’s romance with Wendy had fizzled out. Opening about the split, he confessed that Wendy needed someone who had more time. By his admission, they were never an item after 3 dates. Mike also admitted he enjoyed their time together.

Much of the details on Mike Esterman’s previous relationship remain a mystery. A man in his mid-’50s as of 2021, he must’ve been married at least once. However, he never gave away details regarding his ex-wife and potential kids. Plus, his social media doesn’t shelter any information related to his previous relationships, marriage, and kids. As for Wendy, she was married to Kevin Hunter in 1997 and stayed married until 2019. The couple had a son named Kevin Jr. who fathered a child with Sharina Hudson.